The Pushkin State Museum presents the exhibition “Russian Jordaens. Paintings and Drawings by Jacob Jordaens from Russian Collections,” which will feature landmark pieces of Flemish artist Jacob (Jacques) Jordaens and convey the interest shown for his works in Russia. The exhibition will be the first to present almost all of the master’s paintings and drawings that are held in Russian museums: the Pushkin State Museum of Fine Arts, the State Hermitage Museum, the Ekaterinburg Museum of Fine Arts, the Nizhny Novgorod State Art Museum, and the Perm State Art Gallery. One of the works will be displayed courtesy of the Holy Trinity Cathedral of the Alexander Nevsky Lavra in St. Petersburg. The exhibition shall comprise 18 paintings and 31 drawings reflecting the milestones of Jordaens’s artistic journey, the diversity of his themes and genres, and the evolution of his style.

Jacob (Jacques) Jordaens (1593-1678) was one of the most prominent painters of the Flemish school alongside Rubens and van Dyck. He worked in almost all genres: he depicted religious, mythological, and historical subjects, and he created portraits and still lifes, giving preference to everyday scenes with burlesque elements. At a young age, Jordaens studied painting from Adam van Noort, a popular Antwerp historical painter and portraitist of that time who is now also known as one of Ruben’s teachers. The works of Jordaens are distinguished by the Baroque expressiveness of plastic forms that glorifies the beauty and abundance of the material world, the festive range of colors, and the rich imagination shown in scene compositions. He struck a balance in his works between exalted and earthly themes, which corresponded with the general life-affirming trend of Flemish art. The international style of Caravaggism played an important role in his establishment as an artist; however, Jordaens remained independent in his deeply personal painting techniques and topics. 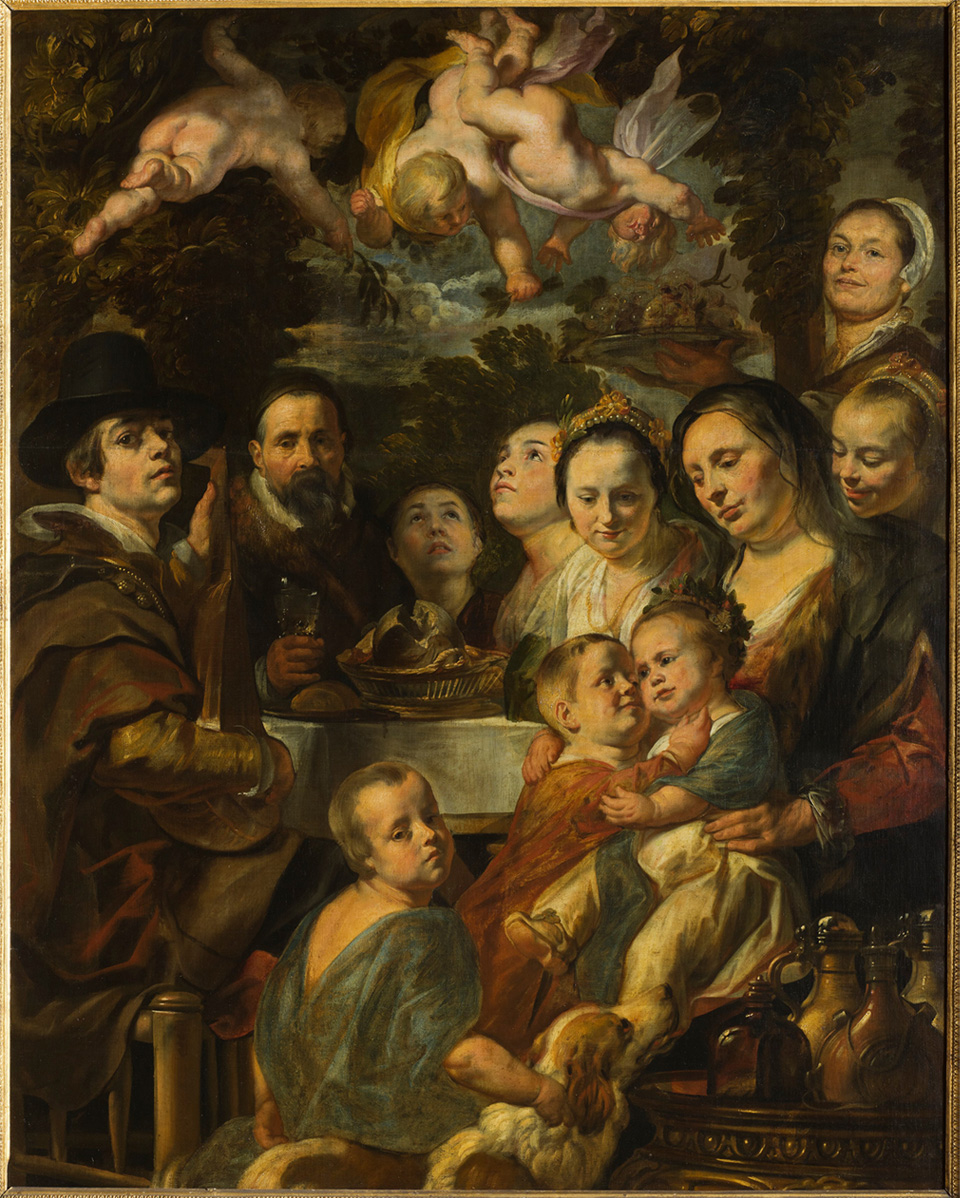 The title of the exhibition, “Russian Jordaens,” emphasizes the fact that the presentation will bring together works of his that are specifically found in Russian collections. Most of them arrived in Russia as early as the second half of the 18th century and originated from the best European collections of that time, including British (by Robert Walpole), French (by Pierre Crozat), and German (by Ernst Gotzkowsky and Count Heinrich von Brühl). Some of the paintings were bought by Empress Catherine II for the Hermitage Museum founded in 1764. It was Catherine II who purchased Jordaens’s monumental “The Lamentation” from a Berlin collection and later donated it to the Alexander Nevsky Lavra in St. Petersburg. Russian aristocrats followed the example of the Empress and started to collect paintings of Flemish Golden Age masters, including Jacob Jordaens.

Russian museums hold a small but interesting collection of works by Jordaens, boasting his best pieces of art in almost all genres. Chronologically, these works represent the time period from when the artist was named an independent master of the Antwerp Guild of Saint Luke until the mid-1660s. An important part of the exhibition comprises four paintings displayed courtesy of Russian regional museums: “Christ and the Samaritan Woman” (from the Nizhny Novgorod State Art Museum), “Meleager and Atalanta” (from the Ekaterinburg Museum of Fine Arts), “Saint Paul and Saint Barnabas at Lystra,” and “The Feast of the Bean King” (both from the Perm State Art Gallery). Until now, these works have scarcely been known to the general public or even to experts. “The Lamentation” from the Holy Trinity Cathedral of the Alexander Nevsky Lavra in St. Petersburg will be exhibited in Moscow for the first time. The painting is leaving the Lavra for only the second time (after relocation from the State Hermitage) in over 225 years to be exhibited in the Pushkin State Museum of Fine Arts.

In recent years, several of Jordaens’s paintings have undergone intensive restoration and were studied by leading Russian scholars. In particular, “Meleager and Atalanta” from the Ekaterinburg Museum of Fine Arts, previously deemed to be a replica of a well-known work by Jordaens, was determined to be a genuine work by the master from an early period of his artistic career based on the artist’s signature found by art conservators.