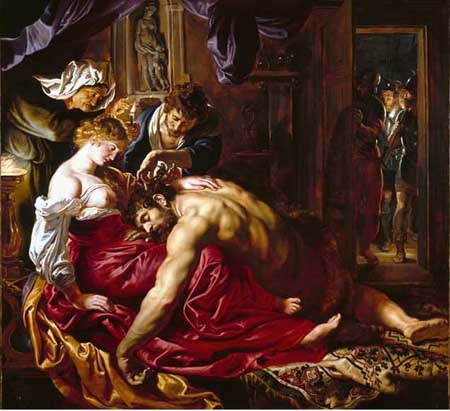 Shortly after returning from Italy Peter Paul Rubens executed the painting Samson and Delilah (c. 1610) for his patron, Nicolaas Rockox, who was burgomaster of Antwerp. The showpiece of the latter’s collection, it was executed specially to hang above the fireplace of the Great Parlour of Rockox’s patrician residence, thus constituting the focal point of interest in this room. From 1700 to its sale in 1880 the painting belonged to the Rubens collection of the Princes of
Liechtenstein. It is recorded in the painting Banquet in the House of Nicolaas Rockox (c. 1630/35) by Frans Francken the Younger, today in the collection of the Alte Pinakothek in Munich.

Opening at the Rockoxhuis in Antwerp to mark its 30th anniversary before transferring to the Liechtenstein Museum, the exhibition entitled Samson and Delilah: a Rubens painting returns, takes these two paintings as the occasion to reunite other important works of art from Rockox’s collection, thus illustrating his role in the artistic life of early 17th century Antwerp.

Samson and Delilah in context

Rubens painted Samson and Delilah around 1610 for the Great Parlour of Nicolaas Rockox, burgomaster of Antwerp, famous connoisseur and patron of Rubens. It is without doubt one of the most important works painted by Rubens in his early Antwerp period. The Old Testament scene has a moralistic message, raising an admonitory finger at unbridled passion. Engravings from the same period reveal that images of strong women from the Bible enjoyed great popularity at the time.

Rubens executed this work specially to hang above the fireplace in Rockox’s patrician residence. He not only took into consideration the flames of the fire which would have bathed the faces of the protagonists in a warm light from below, but also the way the daylight fell from the left, casting shadows. Visitors to the Rockoxhuis can see the painting in its original position above the fireplace for the duration of the temporary exhibition (16/11/2007 – 10/02/2008) and experience the setting for which the artist originally conceived it.

At the Liechtenstein Museum the painting is being presented at another of its original places of exhibition. After Rockox’s death Samson and Delilah was sold at auction; towards the end of the 17th century the Forchoudt brothers, who were active in the fine art trade, sold this masterpiece to Prince Johann Adam Andreas I von Liechtenstein. It remained in the collections of the princes of Liechtenstein until 1880 when it was removed from the collection on the orders of Prince Johann II von Liechtenstein on the grounds of “impropriety”. Samson and Delilah is now one of the highlights of the National Gallery in London, which has loaned the painting for the duration of this project.

The exhibition catalogue will be published by Skira in Dutch, German and English.