After three months of treatment and study at the J. Paul Getty Museum, two magnificent Frans Hals portraits, Lucas de Clercq and Feyna van Steenkiste, will be on view at the Getty Center May 2008–May 2010. The portraits, owned by the city of Amsterdam and on loan to the Rijksmuseum, Amsterdam since 1891, came to the Getty as part of the conservation partnership program.

With the generous support of the Getty Museum’s Paintings Conservation Council, guest conservator Laurent Sozzani, senior paintings restorer at the Rijksmuseum, and Getty chief conservator Mark Leonard, cleaned the portraits, long obscured by discolored varnish, and investigated Hals’s painting technique. Getty curator Anne Woollett observes that “the engaging characters of Lucas and Feyna are now fully evident for the first time in decades, as is the artist’s distinctive vivid brushwork.”

Lucas de Clercq (about 1603–1652) was a wealthy Haarlem merchant who dealt in potash (an alkaline material used in bleaching), bleached linens, and linen yarn. It is tempting to imagine that he may have provided Hals with the linen supports used for the two portraits. Both artist’s and patron’s families moved to Haarlem from the Southern Netherlands in the late 16th century. Lucas married Feyna van Steenkiste (1603/4–1640), whose family was also involved in Haarlem’s linen and bleaching enterprises, in 1626.

They had three children before Feyna’s death in 1640. An inventory of their household at that time shows that the couple owned a number of paintings. Although these portraits are not included in this inventory, according to tradition they remained in the possession of the family until they were bequeathed to the Amsterdam Historical Museum in 1891. (See the inventory of Lucas and Feyna’s household goods, made after her death, in the Getty Provenance Index® Databases.)

Lucas de Clercq and his wife were prominent members of the extensive Mennonite community in Haarlem, most of whom were involved in the city’s textile industries. Proponents of non-resistance, Mennonites strove to follow the example of the apostles and to live a modest life. Both Lucas and Feyna are dressed modestly in sober black garments that do not ostentatiously display their wealth and social standing.

Rivaled only by Rembrandt, Frans Hals was the most brilliant portraitist working in the seventeenth-century Netherlands. His expressive and often abstract brushwork creating atmosphere and robust three-dimensional forms, as well as his lively characterization of sitters, brought new spontaneity and freshness to the genres of individual and group portraiture. His bold compositional formulas incorporating powerful diagonals enlivened hitherto static approaches to portraiture, and helped establish Hals as a leading artistic figure in his native Haarlem with patrons from the upper mercantile classes. Lucas de Clercq and Feyna van Steenkiste embody the reserved splendor of Hals’s work of the early 1630s, in which the architectural solidity of his figures contrasts with the subtly modulated background. 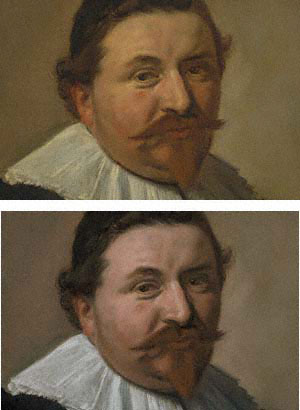 When they arrived at the conservation studio, the portraits were covered with varnish that had darkened and changed color over time, obscuring the artist’s animated brushwork and the impact of the figures. The lower half of Lucas’s body was difficult to interpret. Treatment of the paintings involved the removal of aged and darkened varnish layers, and the visual reintegration of the pictures. Cleaning and examination of the paintings provided insight into Hals’s working methods.