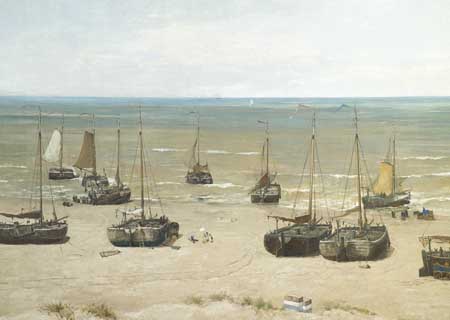 From the 9th of June 2008 Panorama Mesdag will be housing the exhibition “Sientje Mesdag-van Houten – lady of the Hague School. Sientje Mesdag- van Houten (1834-1909) is more than just the wife behind the famous Dutch marine painter Hendrik Willem Mesdag (1831-1915). She painted landscapes and still life paintings of flowers and fruits in an impressionistic style, becoming one of the most important women painters of the Hague School. Thinking about the Hague School, the names of male painters such as Mesdag, Roelofs and Israëls pop up in our minds, but Sientje placed herself in a unique position in this company of men, which we would like to emphasize in this exhibition.

The paintress Sientje, originally from Groningen, moved in 1866 with her husband Hendrik Willem Mesdag and their two-year-old son Klaas to Brussels, where Hendrik was able to devote himself to painting. The couple felt at ease in the artistic environment in Brussels and later on in The Hague, and this surrounding encouraged Sientje to go into painting. The death of their son Klaas in 1871 was for Sientje reason to devote herself professionally to painting. Sientje played a part in the realization of Panorama Mesdag. She is even represented on the canvas while painting, sitting under a white parasol on the beach of Scheveningen. Mesdag is thought to have inserted his wife in the composition in order to express his thanks for her contribution to the largest painting of the Netherlands.

Sientje became a independent artist and is appreciated for her landscapes and still life paintings and mostly for her still life paintings of flowers and fruits. Her use of colour, originality, sharp eye for details and realistic representation of nature are characteristic for her works.

That Sientje considered herself more than just “the wife of” becomes evident in a quote printed in a Groningen newspaper of 24 December 1904 on the occasion of her seventieth birthday: “Although the wife of a famous marine painter, she does not want to be regarded as Mrs. Mesdag in the arts, but as an autonomous female artist, following her own path….”

Zeestraat 65
2518 AA The Hague
The Netherlands