Sketches by Rubens at the Bonnat-Helleu Museum in Bayonne

The Bilbao Fine Arts Museum is exhibiting an exclusive selection of preparatory sketches by Rubens for the Torre de la Parada on loan from the Musée Bonnat-Helleu in Bayonne. In addition to this, another large preparatory sketch for one of the 20 tapestries destined for the Descalzas Reales monastery in Madrid is on view. Finally, with regard to the sketches by Rubens on loan from the Bonnat-Helleu Museum in Bayonne, three reproduction etchings by Paulus Pontius (Antwerp, 1603–1658), belonging to a private collection, can also be seen.

Towards the end of his life, Rubens received the most important commission of his career from Philip IV: a series of around 115 large-scale paintings to adorn the Torre de la Parada, a hunting lodge on the outskirts of Madrid that the king wanted to expand and renovate. Rubens was one of the few artists of the time who was capable of creating a series of paintings of these characteristics and finishing them within a period of approximately two years. Considering the volume of work and the time required to complete them, at his Antwerp workshop Rubens decided to use the help of other Flemish artists. Before applying each one of his compositions onto canvas he conceptualized them in small sketches painted in oil on panels, which he produced himself, around 1636. Most of the depicted themes are mythological and inspired by Ovid’s Metamorphoses. As well as highlighting Rubens’s fertile imagination and technical mastery, the works are clear proof of his creative process and his sensitivity towards classical antiquity.

The seven sketches are now on display in the museum thanks to the support of Fundación Banco Santander and the scientific guidance of Alejandro Vergara, head of the Conservation of Flemish and Northern European Paintings until 1700 of the Prado Museum. 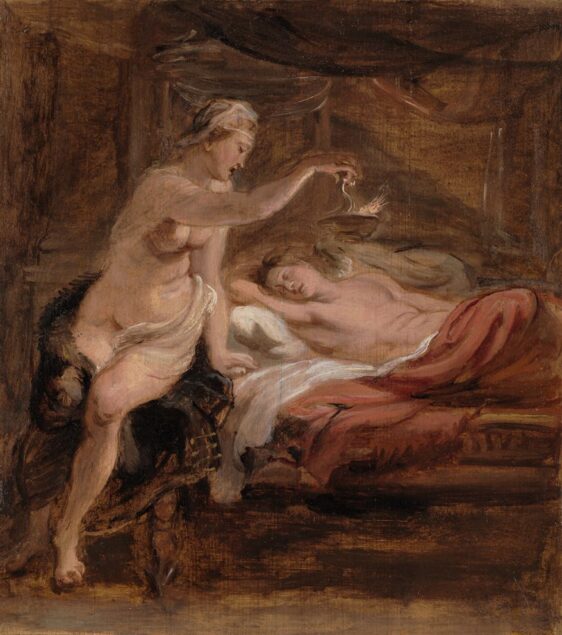 The collection of sketches is an excellent example of this important, yet unknown to the public, aspect of the Flemish painter’s work. They belong to a prolific period, in which Rubens worked at the service of the Spanish court. Six of them are consistent with the decoration of the Torre de la Parada and, in the middle of the eighteenth century, they remained in Spain owned by the Duke of the Infantado, along with another 50 sketches. Originating from this collection, they were then acquired by the Bayonne-born officer and explorer Victor-Bernard Derrécagaix (1833–1915) on his passing through the country. In 1921 it was his widow who formalized his legacy to the Bonnat-Helleu Museum, adding another sketch by Rubens, made for the tapestries of the Descalzas Reales monastery, which Derrécagaix had also acquired in Spain.

Regarded as the most outstanding painter of the seventeenth century in Europe and one of the most important in the whole of art history, one of the numerous virtues of Peter Paul Rubens (1577–1640) lies in his mastery of sketches. Rubens’ work stood out in this facet, which is so crucial to understanding his creative process, for both his quality and quantity—he created around 500 copies, almost one-third of his total output. His sketches also transformed and outstripped the traditional concept of previous study, which he used as an exclusively paper-based medium.

Rubens received a meticulous, polyglot, classical education which enabled him to feel at home in aristocratic milieus from a young age. During his sojourn in Italy serving as the Duke of Mantua’s chamber painter, he became familiar with the works of the Renaissance masters. In Spain, he showed his skill at creating grandiloquent portraits, and later in Antwerp he addressed religious themes with a splendor that has not yet been matched. His extensive output is due to his prodigious skill as a draughtsman and colorist, with unique expertise in capturing human anatomy and developing the broadest range of themes, and to the collaboration of the countless helpers working in his extensive atelier.

In 1636, Philip IV and the architect Juan Gómez de Mora set out to enlarge a small fortress that Philip II had built with the architect Luis de Vega on the outskirts of Madrid. The outcome of this remodeling was a small palace turned into a hunting pavilion called Torre de la Parada, and the monarch commissioned several artists to create an ambitious groups of paintings to decorate it. The most important series, which contains 60 works on mythological themes, was commissioned to Rubens that same year by the cardinal-infante Ferdinand of Austria, Philip IV’s brother, inspired by Ovid’s Metamorphoses and the life of Hercules. The painter divided the series into several sections which did not have a specific program but were related to each other by the purpose of the space in which they were located: all the paintings depicted hunting and recreational scenes. The compositions and themes were dreamt up by Rubens himself, who painted the sketches in oil on Torre de la Parada small oak boards which were later transferred to large canvases by him—he personally took charge of 14 works—and other painters he hired, including Jacob Jordaens and Jan Cossiers. We know that the work was completed by 1638–1639, but the building, along with the majority of paintings, disappeared in a fire during the War of the Spanish Succession in 1714, so Rubens’ sketches, which are scattered about different collections, are an exceptional testimony of this project. The six presented in this gallery show vigorous, synthetic execution, largely conditioned by the requirements of the commission, whose deadlines and volume forced the artist to deploy a display of inventiveness that guaranteed the richness and variety of the compositions, as well as their necessary narrative clarity. The clearly defined outlines and the use of very light layers of paint, which often show glimpses of the primer, are examples of the artist’s technical prowess. 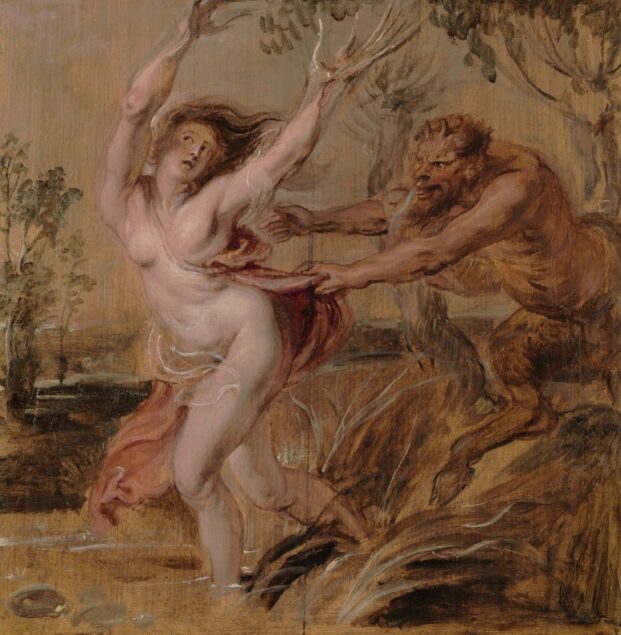 Throughout its history, the Descalzas Reales monastery in Madrid has been the residence of different royal and aristocratic ladies whose donations created an important art collection. One example is the infanta Isabel Clara Eugenia, the daughter of Philip II and the governor of the Netherlands, who in 1625 commissioned Rubens the sketches to make 20 tapestries in Brussels on the theme of the triumph of the Eucharist as the main dogma of Catholicism to decorate the monastery. Based on these sketches, which are among the best in the painter’s oeuvre, his helpers made the large cartoon, which was an intermediate step. The facture of these modelli, made in oil on wooden boards, is more elaborate and larger in size than in the series in Torre de la Parada. The Prophet Elijah Receiving Bread and Water from an Angel, which is displayed in this gallery, clearly shows qualities inherent to this key figure in the Baroque, such as his loose, self-assured brushstrokes and the transparency of the color.