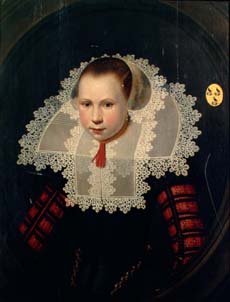 This exhibition features some of the most beautiful Dutch portraits of the 17th century, from several collections including that of the De Looper family.

Every day we look at dozens of portraits, at home on the wall or in the newspaper, or out of doors on billboards and in our public spaces. Four centuries ago, however, a portrait was a rare thing. Only very well-to-do citizens could afford to have portraits made for their entrance halls, bedrooms or suites.
Stiff collars and caps, pious closed mouths, rouged cheeks and looks of self-assuredness expressed the social standing of the subjects of these portraits. But there were exceptions too, such as Elisabeth Taillarde, whose provocative portrait shows her in the forest with her bosom half-exposed.

The three paintings belonging to the De Looper family were restored for this exhibition. A spectacular discovery was made during work on the portrait of Stephanus de Looper: the layer of black around the portrait concealed a frame and additional items of clothing.

The exhibition was assembled and designed by Marianne Kleijwegt and Dorine de Vos. Ms. de Vos is well known as the designer of the Hotel New York in Rotterdam, and as an illustrator of cookbooks.