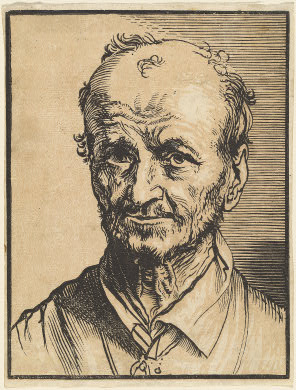 Woodcut in its classic form achieved a final triumph in the Baroque era when painters of exceptional caliber chose it as a dramatic means for expressing the energy and refinement of their draftsmanship. The woodcut offered wide variation in scale and the advantage of printing in colors, and invested a bold element of abstraction into a painterly art of illusion. Most of these works result from close collaboration between a painter and a master block cutter. At their best they reflect a perfect fusion of skill and imagination. Titian, Albrecht Dürer, Giuseppe Scolari, Peter Paul Rubens, Jan Lievens, Christoffel Jegher, Guido Reni, and Bartolomeo Coriolano are represented among the 65 works.

Among the most extraordinary of the woodcuts in the exhibition, those by Domenico Beccafumi, Giuseppe Scolari, and Jan Lievens, are all very likely conceived and executed by the artists themselves. However, most baroque woodcuts resulted from close collaboration between a painter and a master block cutter. The Flemish artist Peter Paul Rubens, for example, worked with Christoffel Jegher, and the Bolognese artist Guido Reni worked with Bartolomeo Coriolano. The best of these alliances were not always a matter of a fine craftsman faithfully executing an artist’s design, but just as often they reflected the joint realization of an aesthetic idea.

Woodcut is the earliest known method for replicating images on paper, and by the Renaissance it had reached an unparalleled degree of technical and aesthetic sophistication. The baroque woodcut developed a rich and diversified language of its own, demonstrated in examples ranging from intimate book illustration to elaborate narrative cycles and allegories and from single sheets to monumental friezes suited to mural decoration, all of which will be on display in this exhibition.

A woodcut is made by cutting a design in relief on the surface of a plank, a process that leaves a network of raised lines to be inked and printed with a press. This technique meant that the baroque preferences for painterly brushwork, lavish color, and subtle atmospheric tonality were all but impossible to recreate. Nonetheless, between 1580 and 1650, artists recognized the continuing potential of the woodcut as a vital artistic medium in its own right. Because woodcuts permit flexibility in scale and images can be reproduced quickly, the medium served as a highly effective way to disseminate works of art to a wider public.

The exhibition is supported by a generous grant from the Thaw Charitable Trust.