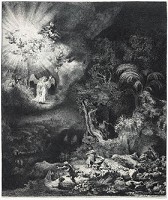 Dürer, Rembrandt, Picasso – these three names resonate like a mantra in the history of Western printmaking. Each artist cultivated an international reputation during his own lifetime and each represents the pinnacle of achievement within the mediums up to his era, Dürer in the early 16th century, Rembrandt in the mid-17th and Picasso in the 20th century. Arguably, in their creativity and technical skill, each attained a stature few have equaled and all set standards to which five centuries of subsequent printmakers have aspired. This exhibition features the work of all three masters, focusing on the innovations each introduced and will also present many significant aspects of the various media from wood and linoleum cuts, engraving, etching, aquatint, drypoint and lithography.