In Vermeer’s Delft, the life of Johannes Vermeer (1632-1675), his network and his relationship with the city of Delft will take center stage. On the basis of more than 100 objects from Dutch and foreign collections, including masterpieces by Delft painters, objects of applied art, maps, prints, drawings, books, biographical documents and other archival matter, a picture of the bustling city atmosphere of the seventeenth century will be painted. The exhibition will run concurrently with the major Vermeer exhibition at the Rijksmuseum in Amsterdam.

Vermeer’s Delft takes visitors back to seventeenth-century Delft. They will make the acquaintance of people from Vermeer’s immediate surroundings, like his mother-in-law, Maria Thins, his fellow painter Leonaert Bramer, family notary Willem de Langue, art collectors Maria de Knuijt and her husband, Pieter van Ruijven, and master baker Hendrick van Buyten, who also collected art. Visitors will meet a man of flesh and blood: husband, son-in-law, entrepreneur, father of 15 children, and innkeeper. They will thus get closer to the man behind the myth and better understand how Vermeer became one of the most beloved artists of the seventeenth century.

Vermeer was active in Delft at a time when local painting, and Delft genre painting in particular, reached a high point. Important masters like Paulus Potter, Emanuel de Witte and Jan Steen spent time in Delft and painters such as Carel Fabritius, Gerard Houckgeest and Hendrick van Vliet laid the foundations for important artistic innovations with their new approach to perspective, space and light. Johannes Vermeer benefited like no other from these artistic stimuli, which he adapted to his own purposes. The exhibition presents masterpieces by the most important masters in Delft from the period 1550-1675: Pieter de Hooch, Jan Steen, Gerard Houckgeest, Cornelis de Man, Anthonie Palamedesz and Maria van Oosterwijck. On the basis of their works of art, we will paint a picture of the artistic climate around Vermeer, which shaped him as an artist. 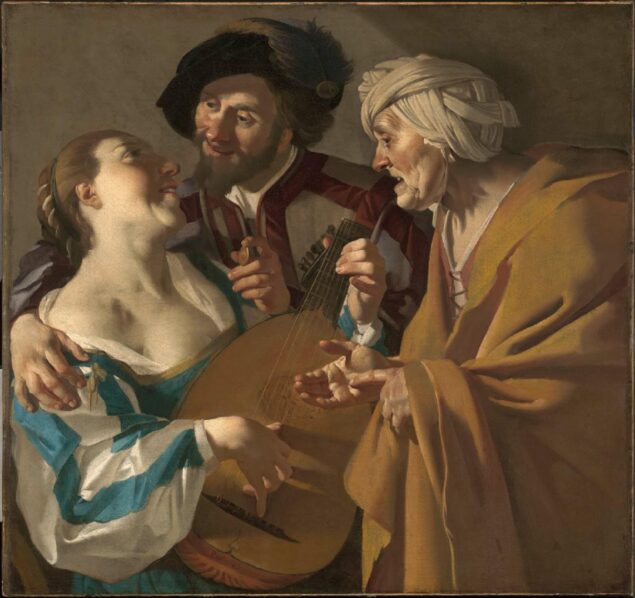 The Procuress, from 1622, by Dirck van Baburen (Museum of Fine Arts, Boston), is a key work in the exhibition. The painting may have been part of the collection of Maria Thins, Vermeer’s mother-in-law, with whom he and his wife and children lived. Vermeer painted this work in the background of A Young Woman seated at a Virginal (National Gallery, London). Besides this clear reference, Vermeer was influenced in his early work by Utrecht Caravaggisti like Van Baburen. He even literally borrows the subject of the procuress.

Another absolute masterpiece is Jan Steen’s 1655 painting Adolf and Catharina Croeser on the Oude Delft (also known as The Burgomaster of Delft and his Daughter), from the Rijksmuseum. Although Steen was only active in Delft for a short time, he did paint this exceptionally beautiful portrait of the wealthy grain merchant Adolf Croeser and his 13-year-old daughter Catharina, who lived diagonally across from Steen. At the same time, Steen portrayed two beggars next to the prosperous pair. In the blink of an eye, the rich and poor of Delft come into sight. A reality Vermeer experienced himself: after years of prosperity –he belonged to an upper, well-to-do class as a result of his marriage to the wealthy Catharina Bolnes – he died a poor man in the end. And left his wife and children in debt. After Steen’s painting came into foreign hands, the Rijksmuseum was able to acquire it in 2004. 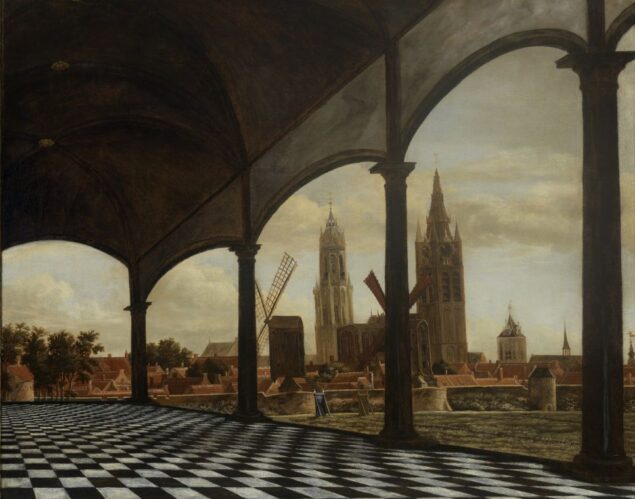 The Stadsarchief Delft (City Archive) holds dozens of items related to the ups and downs of Vermeer’s family, friends and colleagues: estate inventories, wills, certificates of marriages and births, records of conflicts and of burials. A selection of archival matter enables visitors to actually witness certain moments in their lives. Besides this, seventeenth-century cityscapes, prints and maps provide a factual image of Delft as Vermeer saw it. Visitors take a step back in time, into the world as the artist must have experienced it.