The Fall of Haman: Rembrandt’s Picture in the Mirror of Time

On 4 October 2019, it was be exactly 350 years since the death of the great artist Rembrandt van Rijn (1606–1669). This date is being widely commemorated in the Netherlands and around the world. For all exhibitions dedicated to the artist, see our Rembrandt Year page.

The Hermitage’s collection of Rembrandt paintings and graphic works is among the finest in the world. All periods in the artist’s oeuvre are represented in the museum, from early works to those created in the last years of his life. An entire hall is given over to his canvases, while the museum possesses an almost complete collection of his etchings. Displayed separately are numerous works by his pupils (in the Hall of the School of Rembrandt).

The Fall of Haman (circa 1660–66) is a painting with a phenomenally powerful impact that dates from Rembrandt’s late period. The picture came into the Hermitage in 1773, after Empress Catherine the Great bought it from the Scottish merchant and art dealer John Blackwood.

The central image of the composition – a man dressed in rich Eastern clothing – is the most vivid and highly dramatic personage. His pale face with lowered eyes beneath the glittering turban seems drawn, bearing the imprint of bitter resignation. His pose expresses powerlessness. The palm of his hand is pressed to his chest, as happens in moments of strong psychological shock. In the depths of the picture on the right is a man in royal attire, on the left a simply dressed grey-bearded elder. The artist had placed the central figure on the boundary between the dark background and the illuminated foreground. The impression is created that he is leaving the other participants in the scene. 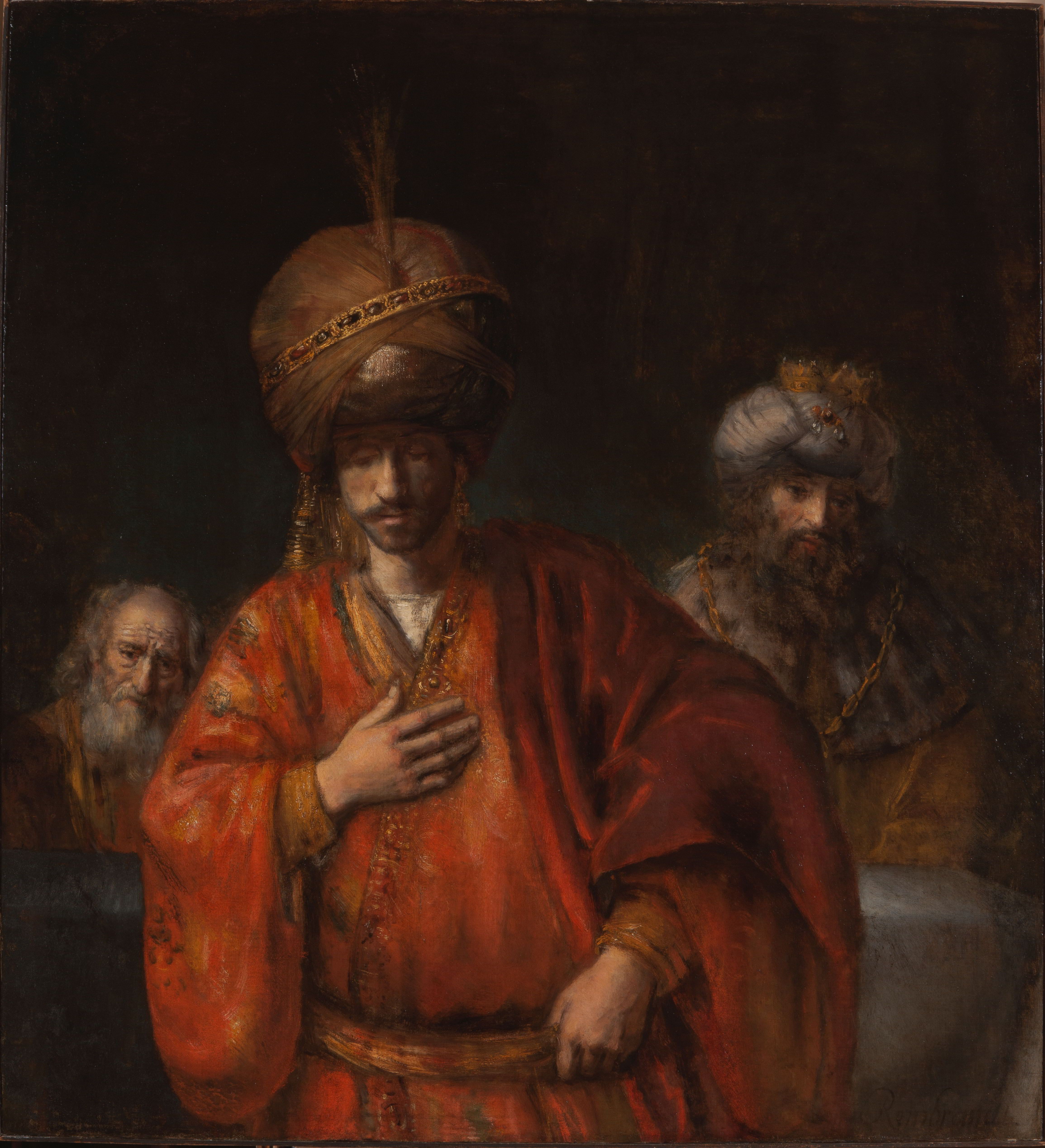 The figurative complexity of the Hermitage painting, evoking rich associations, has in the past given rise to various hypotheses about its subject and dating. From the mid-18th century, the composition was known as The Fall of Haman (or Condemnation of Haman), illustrating an episode from the Old Testament Book of Esther. The book tells of how the young queen Esther and her guardian Mordecai managed to avert the insidious plans of King Ahasuerus’s all-powerful favourite Haman, who intended to annihilate all the Jews in Persia. In the 17th-century Netherlands, the Book of Esther was very popular. The inhabitants of the United Provinces saw the triumph of virtue and the fall of a tyrant as a parallel to their own struggle against Spanish rule.

In the 20th century, a lively discussion developed about the subject of the painting, with other interpretations also being put forward – David and Uriah, Jonathan Leaving Saul’s Feast, Joseph Turning from His Brothers, but all of them failed to find sufficiently convincing justification. The majority of specialists are agreed that Rembrandt depicted Haman at the moment of hearing Ahasuerus command him to accord the highest honours to his chief foe – Mordecai the Jew. The stunned Haman submits to fate, realizing that this is the beginning of his downfall. The concept and execution of the picture are in keeping with the search for means of conveying complex dramatic emotions that was typical of Rembrandt in his late period.

The figurative complexity of the composition is underlined by the Eastern motifs that play an important role in the Dutch master’s pictures. The world of the exotic East as portrayed by Rembrandt is a subtle interweaving of rich creative imagination, observations from life and impressions gleaned from artistic sources: drawings and prints of old European masters and also illustrated books about journeys to the East that the artist either collected himself or came upon in Amsterdam.

The recently completed restoration of The Fall of Haman freed its surface from thick layers of yellowed varnish and retouchings, allowing us to see more precisely the distinctive features of the artist’s painting technique, rich in subtle nuances of colour and expressively textured brushwork.

Many historical themes and episodes from the books of the Old Testament found their reflection in works by Rembrandt and his contemporaries. The exhibition includes Rembrandt’s etching known as The Great Jewish Bride (circa 1635), and also the celebrated engraving The Triumph of Mordecai (circa 1641), in which the artist depicted Haman in the foreground. Visitors will see a painting by one of Rembrandt’s early pupils Ferdinand Bol (1616–1680) – Young Woman Looking in a Mirror (The Toilet of Esther?), dating from the 1640s, and the picture Esther’s Feast by an unknown artist of Rembrandt’s school. 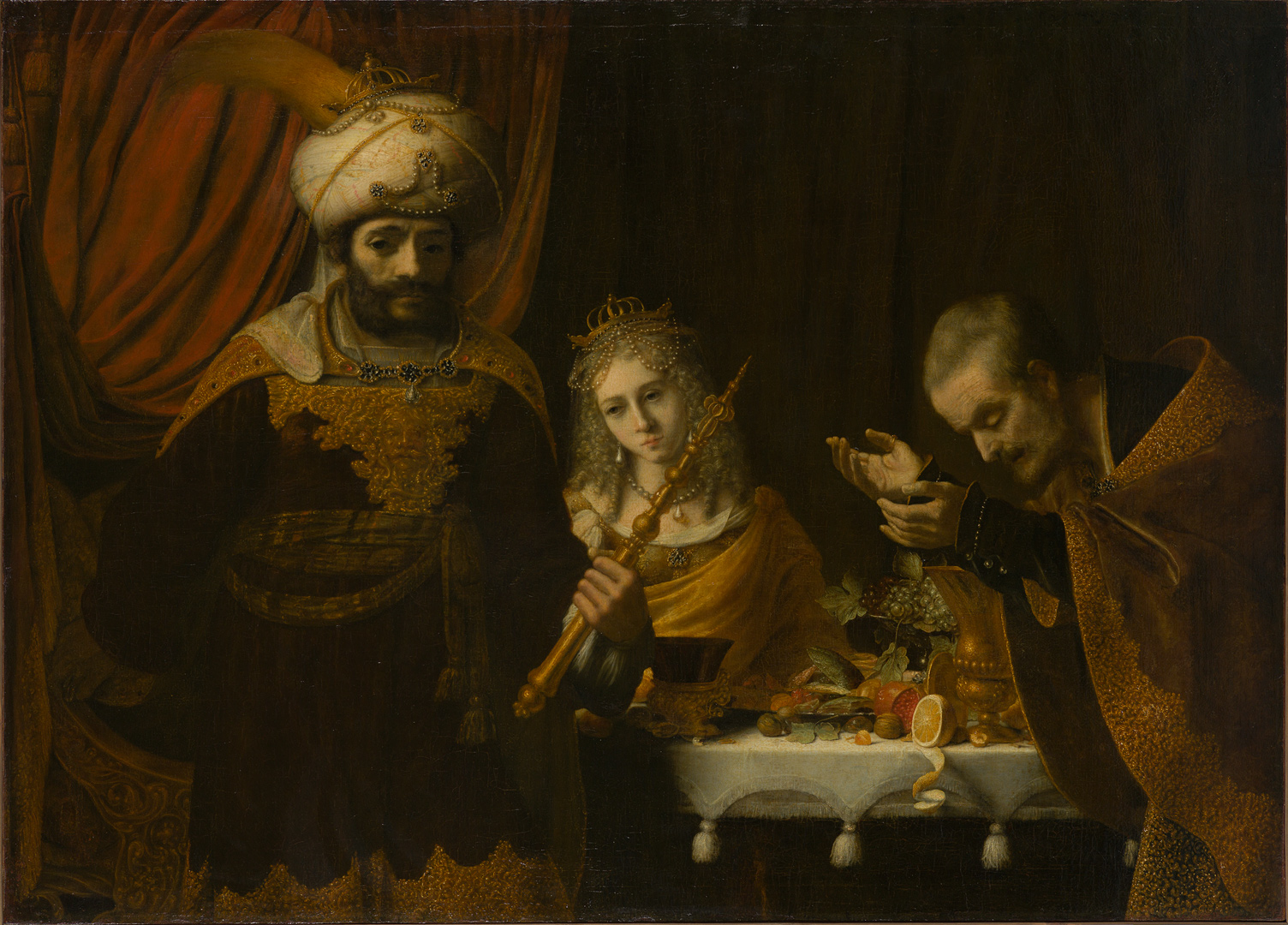 The author of the idea and curator of the exhibition is Irina Alexeyevna Sokolova, Doctor of Culturology, chief researcher in the State Hermitage’s Departments of Western European Fine Art, Keeper of 17th- and 18th-century Dutch paintings.

The State Hermitage Publishing House has produced a scholarly illustrated catalogue in Russian for the exhibition: “Padenie Amana”. Kartina Rembrandta v zerkale vremeni (2019). The catalogue has a foreword by Mikhail Borisovich Piotrovsky, General Director of the State Hermitage, entitled “A Purple Cape in a Dark Space”. The catalogue texts are by members of the Hermitage staff: Irina Sokolova (“The Fall of Haman: Rembrandt’s Picture in the Mirror of Time”) and Victor Korobov (“The Fall of Haman: The Study and Restoration of Rembrandt’s Picture”). Irina Sokolova is also the scholarly editor of the catalogue.