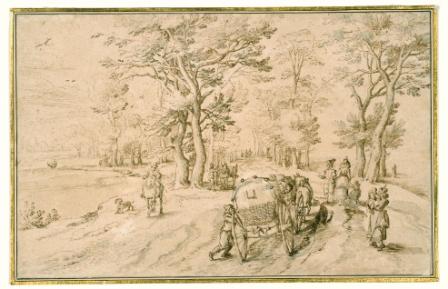 In the spring of 2007 the Centre for Fine Arts is organizing a large-scale exhibition about Flemish and Chinese Art. The project is led by the internationally celebrated artist Luc Tuymans and Yu Hui, curator of the Palace Museum in Beijing.

The concept of the exhibition is to initiate a dialogue between Flemish and Chinese world views. Drawings and paintings from the 15th century till the beginning of the 20th century by, among others, Van Eyck, Breughel, Rubens, Van Dyck, Ensor and Spilliaert confront works on paper and silk from the Ming and Qing dynasty and the early Republic of China. The idea is to show the paintings not only as representatives of a genre, but to place them in a wider context so that the two world views of that period can be presented more clearly.

The title of the exhibition, The Forbidden Empire, derives from the book of the same name by the Dutch author J.J. Slauerhoff. Slauerhoff worked as a ship’s doctor for several East-Indian companies. Consequently he made many voyages to China, Hong Kong and Japan, and later also to Latin America and North Africa. Shortly before he died in 1936 at the age of 38, he remarked that the world had become a much smaller place in terms of distance, but much larger on a psychological level. So rather than serving an exotic purpose, the title of the exhibition expresses the layers of meaning evoked by the combination of the two world views.

The exhibition’s locations – first the Centre for Fine Arts in Brussels, then the Palace Museum in Beijing – played an important role in the elaboration of the concept. The Centre for Fine Arts has since its foundation been a multipurpose venue where various artistic disciplines meet and interact. The building’s almost labyrinthine form is designed to give expression to this simultaneity. The institution has no permanent collection. As is well known, the Palace Museum, conversely, houses a huge art collection. It is based in the Forbidden City, which stands as a symbol for steadfastness and harmony, a centre upon which everything converges, and for a culture of more than 5000 years’ uninterrupted, centralized power, regardless of political change and upheaval. The West, in contrast, has been burdened by many changes of governance, resulting in a fractured approach to the process of perception and its patterns of visualization, which immediately adapted themselves to the reigning worldly and religious regime. And so a way was cleared for visual thought, which continually gained a new form within the context of the circumstances and as a reaction to them. Classical Chinese art avoided these areas of tension and, from the basis of the idea of harmony, focused on the image.

Luc Tuymans: “We endeavour to open up the dialogue through the visual image, without detracting from the two traditions. We work with ‘punctuations’: for example, two Chinese group sculptures are punctuated by a Western work.” How do artists depict movement? How do they convey distance and detail, scale and depth? How important are the narrative element, calligraphy and iconography? What about reproducing shadow, nudity, the idea of original sin, etc.?

As visitors follow the 1,200-m² circuit they discover different visions, each from the specific context of the art of the Low Countries and that of China. The exhibition breathes new life into the old masters and creates a bridge to subsequent section with contemporary art. The Forbidden Empire will travel on from the Centre for Fine Arts to the Palace Museum in the Forbidden City, where it can be seen from June 27th 2007.