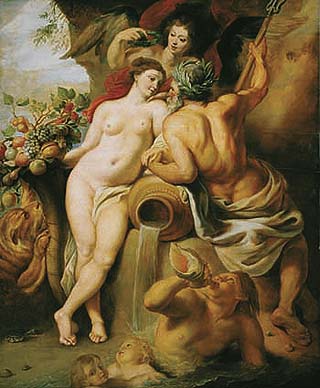 On 20 May 2004 two works by the great Flemish painter from the private collection of Moscow art connoisseur V.A. Logvinenko were put on display in the Rubens Hall. These are the small-scale paintings The Adoration of the Shepherds and The Union of Earth and Water. Both compositions are linked with earlier works by the artist. The Union of Earth and Water is a smaller version of a large decorative canvas that is in the State Hermitage collection. The Adoration of the Shepherds repeats motifs found in several paintings of the Italian and early Antwerp period of the master, though on the whole it is a completely new composition.

The subject of the Hermitage painting of The Union of Earth and Water and of its smaller size version is the glorification of the alliance of two elements: Cybele and Neptune. Winged Victory crowns the gods with laurels while Triton blows on a seashell, thereby calming the waves in which cherubs are playing. A tiny tiger strains to reach a cluster of grapes. The composition expresses a formula that was established ever since the 16th century: Peace brings Abundance.

The small-scale version of The Union of Earth and Water was evidently made to order for a certain patron. It is well known that Rubens entrusted his assistants with making copies of earlier compositions, though he followed the work in process and intervened at various stages. Technical analysis and visual inspections carried out in the Hermitage prove that Rubens’ assistants carried out the preparation of the composition, the portrayal of Triton and the two cherubs, the tiger and cornucopia. However, the most important part of the composition – the central group – was done with the master’s participation. The peculiarities of the painting and technique of execution find similarities in Rubens’ works from the second half of the 1620’s, which enable us to establish the date during this period.

The special technical characteristics of the execution correspond to the master’s working methods. The painting was done using the traditional Flemish technique of semi-transparent, multi-layered, glossy painting with a white chalk base coat that optically enhances the brilliance of the layers of pigment. This technique is the reason for the greater luminosity and higher color intensity of the paints used in the small-scale Union of Earth and Water compared with the Hermitage painting.

Among art historian specialists who have performed an expert analysis of the painting, the most authoritative conclusion was provided in 1965 by Professor Leo van Puyvelde (Belgium), a specialist on Rubens’ work. He considered this work to be a small-size version of the large composition by Rubens that now belongs to the Hermitage.

The Adoration of the Shepherds has an intimate character and is noted for the emphasis on the genre treatment of a subject from the Evangels. The figures of Mary, the Christ child, the shepherds, youths and shepherdesses in the right part of the composition can be traced back to the group of personages in the large altarpiece called The Adoration of the Shepherds (or The Nativity) which Rubens painted in 1608 for the San Spirito Church in the city of Fermo. The small painting does not have the group of angels over the creche or the figure of Joseph.

The small-scale Adoration of the Shepherds is rich in genre motifs that are inherent in the narrative principle and this distinguishes it from the lÞfty structure of other altarpieces. The general tonality used in the Adoration from the V.A. Logvinenko collection is close to a Hermitage oil sketch, although it is difficult to compare painterly signatures, since the esquisse is done in a broad and energetic manner while the Moscow painting was done with a fine brush and smaller strokes of oil paint. The landscape background is typical of Rubens in his Italian and early Antwerp periods. The figures to the right and left of the composition are close to the master’s painterly signature. X-rays of the work show a white-ground preparation of the composition, which was typical of Rubens. However, a number of points in the composition and the professional level of its execution, which though high is not up to the level of Rubens himself, compel us to suppose that the painting was begun by Rubens but was finished by one of the painter’s students.