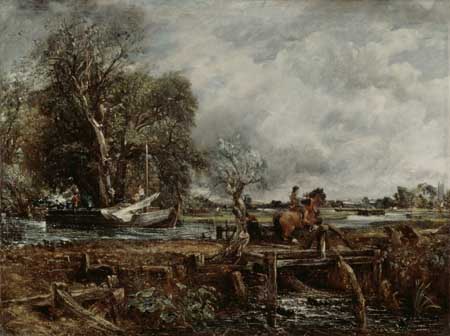 This autumn, the masterpiece The Leaping Horse by renowned English landscape painter John Constable will be on view in the Rijksmuseum. This impressive painting from 1825 is one of the masterpieces of the collection of the Royal Academy of Arts in London. In the Rijksmuseum, Constable’s painting will be juxtaposed with masterpieces from the 17th-century landscape painters Ruisdael, Hobbema and Koninck. The work of these Dutch painters formed a great source of inspiration for The Leaping Horse. This will be the first time that this work by Constable will be on display beside the works that inspired it.

Constable’s Leaping Horse will be the first ‘guest’ in an annual series of foreign masterpieces presented by the Rijksmuseum which focuses on the influence that Dutch 17th-century masterpieces have had on the art of painting.

The work portrays a barge horse jumping over a cattle-barrier on the towpath of the river Stour. The Leaping Horse is the last work in a series of six paintings of the river Stour at the border of Essex and Suffolk, which was the landscape where Constable himself grew up. The dimensions of these works – almost one and half by two metres – make them exceptionally large for landscape art of the time. Through composition and use of colour, Constable aimed to provide his audience with an intense experience of nature. With The Leaping Horse, Constable reached a pinnacle in this regard. Even the smallest details contribute to our experience: we can almost hear the call and flapping wings of a frightened moorhen in the painting’s lower right corner.

Seventeenth century landscape paintings were an important source of inspiration for Constable. He admired the typically Dutch elements of landscapes by Philips Koninck, Meindert Hobbema and Jacob van Ruisdael, such as vast clouded skies and the low horizon. Ruisdael’s Landscape with waterfall is a good example. Ruisdael was very popular in 19th century England, especially among the great English collectors, which allowed Constable to make copies of many of Ruisdael’s works. He also gave lectures on Dutch painters, praising the way they depicted their own surroundings: “The Dutch painters were a ‘stay-at-home’ people, hence their originality.”

Constable’s Leaping Horse will be presented in the Rijksmuseum’s permanent exhibition The Masterpieces in the Philips Wing, directly beside the works of the 17th century Dutch landscape artists. This will provide visitors to the Rijksmuseum the unique opportunity to re-live this moment of inspiration.