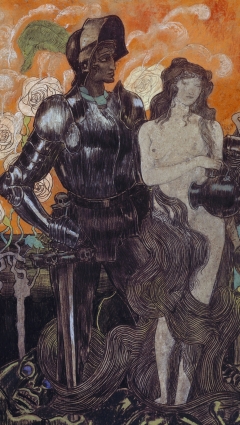 Around 1900, Gustav Klimt began to draw inspiration from the work of Jan Toorop. Thanks to a unique collaboration with the Albertina Museum in Vienna, the Gemeentemuseum is now able to bring works by the two artists together, highlighting Toorop’s essential role. The exhibition also analyses the influence of George Minne and Fernand Khnopff.

It has always been clear that Jan Toorop had an influence on his renowned Viennese contemporary, Gustav Klimt. However, years of research by guest curator Marian Bisanz-Prakken, the Albertina Museum’s Klimt expert, have now shown that Toorop must in fact be regarded as a major factor in the development of the ‘modern’ Klimt. Jan Toorop was one of the few Dutch artists to exhibit twice around the turn of the century at the Vienna Secession. Gustav Klimt saw his work there and was particularly impressed by his use of line, also known as the ‘salad oil style’. At this time, together with other artists of his generation, Klimt was seeking to open up Viennese art to international developments. In his drawings and paintings he was gradually moving towards the expressive use of line which led to the Beethoven Frieze (1902) and to the masterpieces of his golden period that followed soon after.

Toorop’s large drawing The Sphinx, currently one of the Gemeentemuseum’s major works and the direct inspiration for this exhibition, and his strongly linear and symbolic masterpiece The Three Brides were of profound and lasting influence on Klimt. The Toorop cult in Vienna reached its peak with the presentation of a group of works in a special room dedicated to him at the twelfth Secession (1901/2). Klimt was most impressed by his linear and symbolic works dating from the 1890s, including works rarely shown together such as Fatalism, Garden of Woes and Les Rodeurs.

It was this presentation of Toorop’s work in Vienna that was so decisive for Klimt’s development. Klimt too started to make use of the scope offered by tightly controlled accumulations of lines, part of a symbolist visual language in which the line was given a new, significant role. This is most clearly evident in the Beethoven Frieze and in Klimt’s drawings, in which he further developed this new visual language to produce magnificent paintings and penetrating portraits. Even in his work after the ‘golden period’ (1903/4-1909), Klimt continued to refer in terms of composition and specific motifs to the model he found in Toorop around the turn of the century.

The exhibition also casts light on earlier influences. The work of the Belgian symbolist Fernand Khnopff made overwhelming impression on Klimt, as did the attenuated ‘Gothic’ stylised figures of the Belgian sculptor George Minne. Minne’s Fountain with kneeling youths caused a furore at the Secession. Pro-Secessionist art critics paid tribute to Toorop and Minne as the great pioneers of a new, forward-looking ‘Stilkunst’.

The exhibition is sponsored by Bouwfonds, which will be concurrently exhibiting masterpieces from its art collection under the title Room with a View.