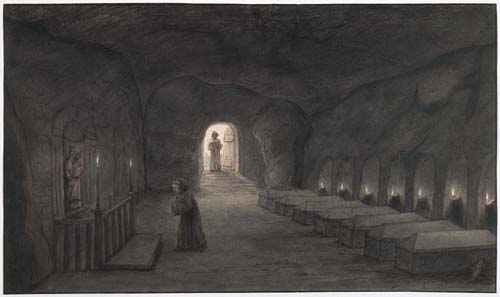 From 16 December 2006 to 11 February 2007 the Rembrandt House Museum will be showing an exhibition of the atmospheric drawings made by Lambert Doomer, one of Rembrandt’s pupils and son of his frame-maker Herman Doomer, during a journey along the Loire in 1646. The exhibition contains almost sixty landscape drawings by Doomer and Willem Schellinks, an artist friend who recorded the journey in detail in a journal.

In 1646 the young artists from Amsterdam, Lambert Doomer (1624-1700) and Willem Schellinks (1627-1678) went on a journey together which led them from Nantes through the most important towns and cities on the Loire on the way to Paris. After a quarrel in Rouen they went their separate ways. Theirs is one of the best-documented journeys of the seventeenth century. Countless drawings by Doomer, one of Rembrandt’s pupils, recorded what caught his eye in the panoramic landscape of the Loire and in the towns and cities they visited. Schellinks, a poet who moved in literary circles, kept a minutely detailed journal, and transcripts in his own hand are preserved in libraries in Copenhagen and Oxford. In 1662-1663 a second journey took Schellinks back to France, and once again he kept a journal.

The exhibition allows the visitor to follow the French journey of 1646 based on the surviving drawings by Doomer and Schellinks. There are the sketches from the journey they undertook and the drawings that stemmed from them, sometimes several years later. For the rest of their lives the two artists continued to work with the material that they had collected there, in part to meet collectors’ demands.

The catalogue accompanying the exhibition will illustrate and describe all of the works. Introductory chapters will examine the lives and works of Doomer and Schellinks and more general aspects linked to their French drawings, such as the journeys through France and the atlas culture of Dutch collectors. For the first time the text of the journals of Schellinks’ French journeys will appear in its entirety. There will also be a picture album recording Doomer’s and Schellinks’ drawings from the 1646 expedition, with a preface and comments by Erik Spaans. The exhibition is being organized in association with the Institut Néerlandais in Paris.