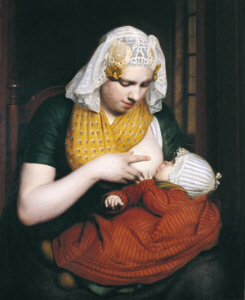 The exhibition illustrates the width and depth of the Museum’s collectiom by putting more than fifty carefully selected objects on display. In a theatrical setting against the backdrop of the histrorical Chancellery, they tell a remarkable story about Friesland.

In search of the Frisian Identity

In the nineteenth century, the call for the preservation of identity was as topical as it is today. The founders of the Frisian Society (1827) were afraid that the Frisian culture was rapidly disappearing. Before it was too late, men like Leeuwarden book seller Wopke Eekhof and Frisian linguist Dr Joost Hiddes Halbertsma therefore tried to collect as many typically Frisian objects as possible. The Society members were mainly interested in the folk culture of Hindeloopen, archaeological finds from burial mounds and traditional costumes.

Appearances can be misleading

In the past 125 years, the Fries Museum has grown to become the largest regional museum in the Netherlands. Tsjoch! (Cheers!) starts with a sketch of the mindset of the founders. The second part of the exhibition highlights unexpected, previously unexplored aspects of the selected objects. Visitors will then find out that appearances can be misleading when relevant knowledge is brought to bear. Exquisite maps of the eleven Frisian cities drawn by Jacob van Deventer in the mid-sixteenth century, for example, were used by Spanish troops to plan surprise attacks. And a twelfth-century bronze dragon candleholder that had been regarded as a fake for many years is, as a recent study has shown, genuine after all. It is now considered one of the top objects of the Fries Museum.

Tsjoch! displays the Frisian past in a surprising and accessible manner. Among the selection are famous objects like the Wieuwerd hoard and Amo te ama me (1881), a painting by Lourens Alma Tadema that the Museum acquired in 2005. Also presented are objects that have only been on display occasionally, or are even shown for the first time, such as the trepanned skull from the Burmania burial mound (Ferwerd). The two parts of the fifteenth-century Gockinga breviary – the most precious manuscript in the collection, which was unfortunately split before 1773 – have been joined again. Tsjoch! also shows the recently acquired and unique J stamp used to mark the identity cards of the Jewish inhabitants of Sneek.