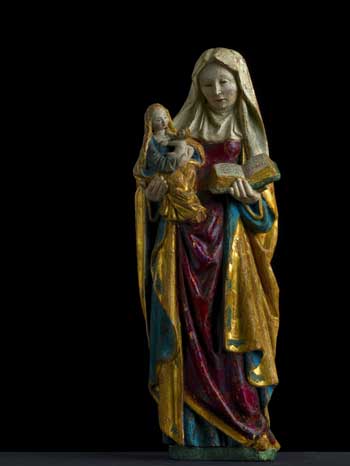 From February 16 until May 25, 2008, the Museum Boijmans Van Beuningen will exhibit a special collection of colored, late-medieval sculptures. The collection will be donated to the museum by Rotterdam harbor entrepreneur Jacques Schoufour. The sculptures were made around 1500 in the Netherlands, France and Germany. They have been amazingly well preserved and the colors are still as expressive as five hundred years ago.

Jacques Schoufour (1927) is a born-and-bred Rotterdammer who was of great importance to Rotterdam harbor as a businessman. He and his wife Inge Martin, who passed away in 2001, were both interested in medieval sculpture. Their collection consists of about sixty sculptures from the Northern and Southern Netherlands, the North of France and the South of Germany, from approximately the period between 1350 and 1500. For several years the collection has been gradually donated to the Museum Boijmans Van Beuningen, in the city Schoufour still feels close to. With this, he is following in the footsteps of collectors like D.G. van Beuningen, Willem van der Vorm and Bierens de Haan, important private collectors who have made the museum to what it is today. The museum already owned a beautiful collection of medieval wood and stone sculptures, to which the Schoufour-Martin collection forms an important addition.

The presentation of the Schoufour-Martin Collection runs simultaneously with the exhibition Dutch primitives: paintings from the late Middle Ages. Most of the sculptures on show, just like the painted panels, were once part of altarpieces, and played a role in church liturgy or private devotion. After it was carved, a medieval sculpture was often not complete. It wasn’t considered finished until the polychrome paint had been applied. The detailed carving as well as the colorful painting, with its tears, drops of blood, colorful clothing and green trees provided the desired realism. Gilding the sculptures indicated at the same time that saints were being portrayed and that the stories took place in a heavenly dimension.

One of the remarkable aspects of the Schoufour-Martin Collection is that so many pieces have retained their sophisticated and valuable finishings. As polychrome paint is extremely vulnerable, and was often painted over after being damaged, or later removed with lye, this is certainly not a common state of affairs. Moreover, during the 16th century iconoclastic furies in the Northern and Southern Netherlands thousands of sculptures were destroyed. The sculptures in the Schoufour-Martin Collection provide a rare view of the colorful medieval church interiors. The exhibition design is by the Armenian-Turkish artist Sarkis. Accompanying the exhibition, a file catalog of this special collection will be published.