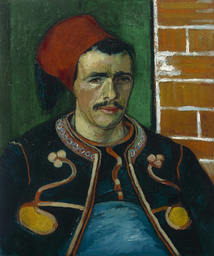 Between Van Gogh’s death and the outbreak of the First World War in 1914 his paintings came to symbolize ‘international’ and ‘modern’ art. Van Gogh was more popular in Germany than anywhere else; German private collectors and museum directors were among the first to buy his work. Expressionist artists recognized the vital force of the pure, bright colours and the confrontational directness of Van Gogh’s work, on which they based their own innovative art.
German artists such as Ernst Ludwig Kirchner and Wassily Kandinsky were particularly drawn by Van Gogh’s technique, his intense brushwork and the sharp colour
contrasts. Austrians Richard Gerstl and Oskar Kokoschka were influenced more by Van Gogh’s emotional approach, as in his psychological portraits. Superb examples of both categories are featured in the exhibition.

Many of the paintings on display, around 20 by Van Gogh and 40 by Expressionist artists, are drawn from the Van Gogh Museum and New York’s Neue Galerie collections. They are accompanied by key works from other public and private collections.