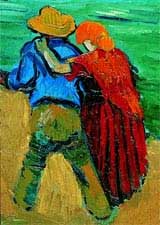 This autumn the print room presents an exhibition about the remarkable friendship between Van Gogh and Bernard. Paintings, drawings and letters reveal the intense exchange of ideas and art that began during Van Gogh’s stay in Paris (1886-1888), and continued afterwards in a lively correspondence. The self portrait that Bernard dedicated to his ‘friend Vincent’ is shown, alongside various paintings of which Van Gogh sent sketches to Bernard.

The correspondence between the two petered out in late 1889 following an artistic difference of opinion, but they remained friends. After Van Gogh’s death in July 1890 Bernard became an enthusiastic champion of his friend’s work, writing articles about him, organizing Van Gogh’s first solo exhibition in Paris and publishing the first collection of Van Gogh’s letters in book form. In doing so he paved the way for Van Gogh’s later fame all over the world. The exhibition also sheds light on the far from insignificant role Bernard played in this regard. In a letter to the art critic Albert Aurier just four days after Van Gogh’s death, Bernard gives a moving account of Van Gogh’s funeral and urges Aurier to write about him, ‘so that everyone knows that his funeral was an apotheosis, certainly worthy of his great spirit and great talent.’

The highpoint of the exhibition is Van Gogh’s painting Strolling couple executed in 1888. In his first letter to Bernard from Arles Van Gogh wrote of a ‘a study I really want to do something with: sailors with their sweethearts coming back to town, outlined against an enormous yellow sun with the strange silhouette of its drawbridge. To show what he meant, Van Gogh included a detailed sketch in his letter, complete with notes giving Bernard an idea of the colours to be used. But Van Gogh was not satisfied with the painting when it was completed. He cut the canvas into pieces, saving just a single fragment depicting a sailor with his arm around his sweetheart.

By displaying this canvas in combination with a depiction of the sketch in the letter – in the same format as the original – and a landscape with drawbridge painted by Van Gogh shortly afterwards in the same place, visitors to the exhibition are given a unique opportunity to see Van Gogh’s way of working close at hand.

Van Gogh’s letters to Emile Bernard are characteristic of the exchange of ideas between the two enthusiastic artists. This is the first time that the letters, written originally in French, have been published with an English translation and facsimiles of each sheet, with a wealth of illustrations of the art that Van Gogh produced in this period and which inspired him. The original letters are owned by The Morgan Library & Museum in New York. They are on public view there through 6 January 2008 in the exhibition Painted with words.