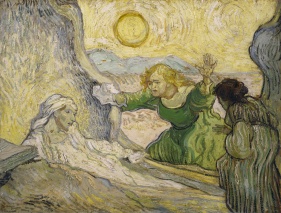 Parallel to Rembrandt-Caravaggio (24 February to 18 June 2006) in the Van Gogh Museum, the print room in the exhibition wing presents a show which brings together Van Gogh and Rembrandt. Around 25 paintings, drawings and letters by the two artists reveal how Van Gogh discovered Rembrandt’s oeuvre and how his artistic appreciation of the old master developed.

In 1888 Van Gogh wrote to his brother Theo that he thought about Rembrandt far more than his studies might suggest. That was no understatement. To look at his work he seems to have absorbed little of Rembrandt’s influence, yet from his letters it is clear that Van Gogh’s interest in the 17th-century master remained with him throughout his life. When he visited the newly opened Rijksmuseum in 1885, for example, he declared that he would gladly have given ten years of his life to have been able to sit for fourteen days in front of The Jewish Bride “with barely a crust of dry bread to eat”.

Van Gogh and Rembrandt attempts to reconstruct Van Gogh’s perspective on Rembrandt. He discovered his work early. In the mid-1870s, while working for the art gallery in Paris, he came under the spell of the Rembrandts in the Louvre, an effect which was to last for many years. In 1877 he saw the master’s etchings in Amsterdam’s Trippenhuis, some of which can be seen in this exhibition. He was not always able to see the originals however, and had to content himself with reproductions in prints and photos, some of which are shown here.

At first, Van Gogh admired Rembrandt as a man and a Christian rather than as a painter, but that changed when he decided to become an artist himself. He came to understand Rembrandt’s artistic genius, and he epitomised for him the ability to evoke and say things “for which no words exist in any language”.

The presentation and accompanying publication show how Van Gogh strove to emulate Rembrandt, but in the spirit of his own age and in his own way. Their paintings may be worlds apart, but not their ideas and intention. Van Gogh tried to paint portraits that expressed the soul of his subject, the way Rembrandt had achieved this in his portraits. For Van Gogh, Rembrandt was a realist who understood that for an artist nature must always be the starting point, while Rembrandt’s integrity had allowed him to portray even the supernatural as if it were something natural.

The show also focuses on Van Gogh’s artistic clash with Gauguin and Bernard, both of whom painted highly stylised depictions of religious subjects. Van Gogh rejected their aesthetic perspective and took Rembrandt as his model, whose religious work he called ‘metaphysical magic’. The exhibition culminates with The raising of Lazarus which Van Gogh painted in 1890, an interpretation in colour of a 17th-century etching by Rembrandt.

Van Gogh and Rembrandt is accompanied by a publication written by Peter Hecht
Van Gogh Museum/Waanders Publishers
80 pages, 55 illustrations, hardback, with ribbon bookmark
The book is available in English, Dutch and French, and is on sale in the museum shop and via www.vangoghmuseumshop.com.