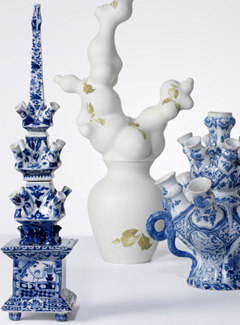 For the first time in history, it has now been possible to put together a comprehensive exhibition of the spectacular many-spouted Dutch flower vases produced in a host of shapes and sizes in the period around 1700. In a unique gesture, Her Majesty Queen Elizabeth II has agreed to lend the museum a number of unquestionable masterpieces in this field: four pyramid-shaped flower holders made to order for William and Mary, then rulers of both Britain and the Netherlands. The items in this exhibition (unique to The Hague) will include spectacular flower pyramids up to two metres in height.

The exhibition is the result of international cooperation between the Gemeentemuseum Den Haag and Het Loo Palace (in the Netherlands), the Royal Museums for Art and History in Brussels (Belgium) and the National Museum of Ceramics in Sèvres (France). Items from the extensive collections of those museums will be supplemented not only by objects on loan from sources such as the Louvre in Paris and many private collections, but also by spouted vases drawn from the collections of the Victoria and Albert Museum in London and the British National Trust and never previously seen outside the UK. The eye-catching highpoint of the exhibition will be four flower pyramids on loan from the Royal Collection of Her Majesty Queen Elizabeth II.

This exhibition will be the first ever to focus on the wide variety of forms in which Delft flower holders were produced. It will include, for example, a number of sensational busts personifying the four continents and pierced with holes designed to hold flowers. More usual, but no less spectacular, items are lidded vases, spouted vases with handles shaped like exotic beasts, ceramic flower baskets, fan and heart-shaped vases, tiered flower holders composed of superimposed spheres, vases in the shape of triumphal arches, narrow-necked vases designed to hold merely a single bloom or two, and rectangular ‘flower bricks’. The exhibition will show that the vogue for spouted vases, which began in Delft towards the end of the 17th century, continues to this very day. Outside the Netherlands, such vases have been produced, for example, in Berlin and Moustiers, and creamware examples have been manufactured both in England and by the firm of Villeroy & Boch in Luxembourg. The two best-known Dutch manufacturers, skilled for centuries in the production of ceramic flower vases, are Royal Delft (De Koninklijke Porceleyne Fles) and Royal Tichelaar Makkum.

The tradition of spouted Delft vases still survives and is being refreshed in the Netherlands by the contemporary ideas of leading present-day designers like Ineke Hans, Guido Geelen, Hugo Kaagman and Dora Dolz. This exhibition will include an example designed less than a year ago by Ineke Hans especially for the Gemeentemuseum and now to be produced in a limited edition by Royal Tichelaar Makkum, as well as one which she designed in 1998. In addition, Dutch designers Jurgen Bey, Ineke Hans and Wieki Somers will each take from the collection of the Gemeentemuseum a surviving ‘spare part’ from a composite period piece and complete it in his or her own way to create both a fascinating interaction between past and present and an entirely new objet d’art.

M. van Aken-Fehmers
Volume 4 in the series of catalogues raisonnés of the Gemeentemuseum’s collections, also including a translation of the essays and summary in English. Accompanies an exhibition held in 2007 in The Hague (Gemeentemuseum Den Haag)
256 pp., 172 illustrations in color and 40 in black-and-white
Zwolle (Waanders) 2007
ISBN-13: 978-90-400-8354-9