Vision of Naval Might. A Marine Painting for the Great Elector

After more than 170 years, a forgotten gem of the Gemäldegalerie can once again be admired in all its beauty: Olfert de Vrij’s marine painting Three-Master on Lightly Moving Sea, which was most likely made for Frederick William of Brandenburg, the Great Elector himself. Taking the newly restored painting as a starting point, the exhibition focuses on the historical background of the painting, the life of the largely unknown artist, the tradition of Dutch marine painting, and the distinctive features of the Hoorn School of Painting.

Olfert de Vrij (1635–1699) executed this extraordinary painting in a specific, extremely sophisticated technique. It is the only example of so-called penschilderijen (pen paintings) in the Berlin Gemäldegalerie. Over the course of time, the precisely executed painting had been badly damaged by defects, yellowing and discolored overpaintings. Its condition led to it being stored away for decades. After an extensive restoration lasting several years, the work can now be admired again in all its beauty. 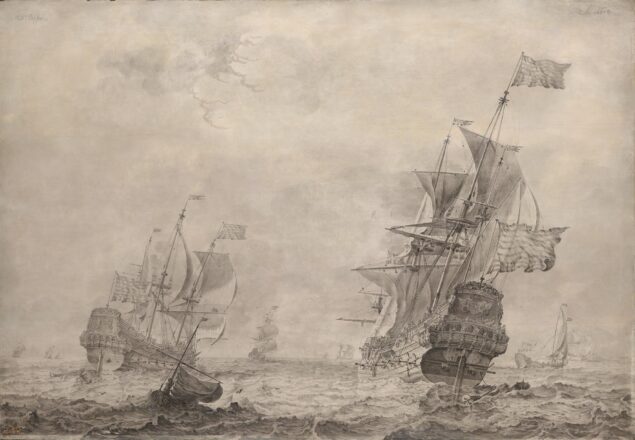 Three Master on Lightly Moving Sea shows the two merchant frigates Grafschaft Mark and Herzogtum Cleve. Their clearly visible coats of arms enable them to be identified. The ships had been built in Amsterdam in 1662/63 by commission of Frederick William. The painting thus documents the Elector’s earliest efforts to enter overseas trade and establish Brandenburg-Prussia as a maritime power. The small but strong Dutch Republic served as a model, whose state system and outstanding position in seafaring inspired the Elector to his own visions for Brandenburg.

Olfert de Vrij worked as a lawyer and municipal official in the North Holland town of Hoorn, away from the major Dutch art centers. Although de Vrij did not work as a professional artist, he was one of the most talented and technically skilled marine painters of pen paintings. Only three works by his hand have survived today. Two of them can be seen in the Berlin exhibition. The Berlin painting stands out because of its quality, its large format and the unusual signature. Instead of using a pen, de Vrij executed the ships and waves here with fine brushes and black ink in an extremely versatile application technique – dabbing, stroking or using washes in shades of grey. This had to be done with the utmost accuracy, as the fast-drying paint left hardly any room for correction. This painting technique, along with age-related changes and historical restorations of the painting, resulted in a complex task for the restoration. In addition to the removal of the yellowed varnish, the difficult solubility of later overpaintings proved to be particularly complicated. This required the development of an unusual etching concept. 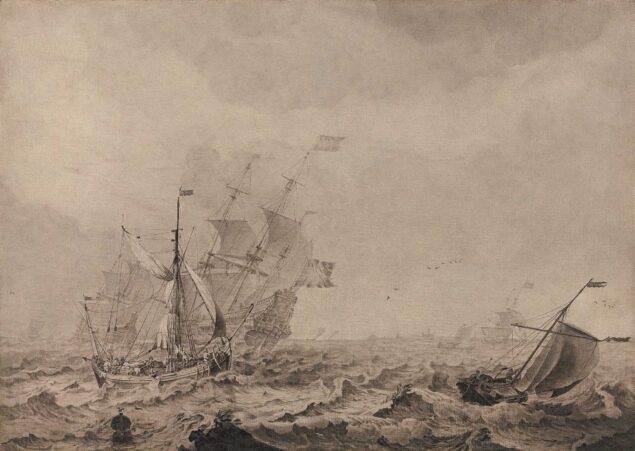 The presentation curated by Dr. Katja Kleinert focuses on the exciting historical background of the painting as well as the life of the artist, who is still largely unknown today. Using a number of examples, the exhibition outlines the context of Dutch marine painting, sheds light on the special features of the Hoorn School of Painting and explains the painting technique and restoration of the Berlin painting. In addition to works from the Gemäldegalerie, the Kupferstichkabinett and the Münzkabinett, two pen paintings from the Westfries Museum in Hoorn and the large-format depiction of the Brandenburg fleet by Lieve Verschuier from the Stiftung Preußische Schlösser und Gärten will be shown.

A lecture series will take place to accompany the presentation, which will address various aspects of the Berlin painting and examine it from different angles.