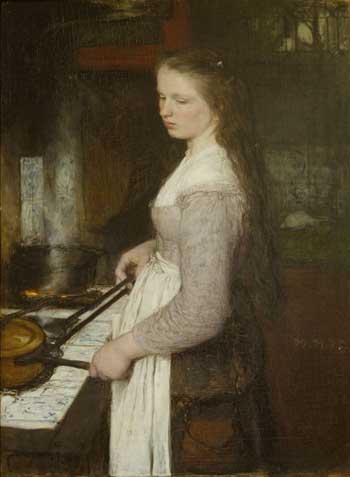 At the end of the year 1848 the English artists Dante Gabriel Rossetti, William Holman Hunt and John Everett Millais founded the Preraphaelite Brotherhood. This group of painters, poets and critics turned their back on the compulsory academicism of the Royal Academy. What they saw as the idealized depiction of reality should make way, they felt, for sincere simplicity of the kind that was lost after the Renaissance. The Preraphaelites embraced the art of the quattrocento, striving as well for the greatest possible truth to nature in their subjects, which they took not only from the Bible and Shakespeare but also from the work of contemporary poets like John Keats and Alfred Tennyson.

The influence of the Preraphaelites on Dutch artists

The central theme of the exhibition is the influence of the Preraphaelites on Dutch artists. While Dutch artists soon took notice of this new English movement, in part through exhibitions in France, it took some time before the formal vocabulary of the English artists began to inspire a following here.

Matthijs Maris (1839-1917), who lived in London, was one of the first Dutch artists to come into contact with the Preraphaelites. Although he often denied it, his work shows clear indications of Preraphaelite influence. This made him an exception among the members of the Hague School. His paintings in turn had influence on such younger artists as Jan Toorop (1858-1928), Antoon Derkinderen (1859-1925), Richard Roland Holst (1868-1938) and Antoon van Welie (1866-1956). They were also inspired by the mystical and poetical images of fairy-tale princesses and dreamy women in the art of their English colleagues. They gravitated to the same literary sources and visual devices.

The exhibition is divided into two parts. The main accent lies on Matthijs Maris, whose drawings and paintings have not been exhibited in large numbers for quite a long time. The second section is devoted to other artists who worked under the influence of Maris and the English Preraphaelites. This group tended to cross the boundary into the applied arts, in the spirit of Gemeenschapskunst, art for the community. In the Netherlands this current was influenced by the Arts and Crafts Movement of William Morris, who in turn stood in close contact with the Preraphaelites.

The exhibition is timed to coincide with the show of work by the Preraphaelite John Everett Millais in the Van Gogh Museum.