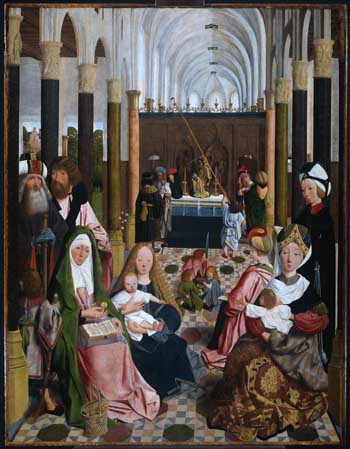 In spring 2008 Museum Boijmans Van Beuningen will present a unique survey of the infancy of Dutch painting. Masterpieces from the museum’s own collection, supplemented with dozens of rare loans from the Netherlands and abroad, will afford the visitor a fascinating glimpse of the late Middle Ages. The fragile nature of the panels means that these works will never again be assembled.

The exhibition Dutch primitives: paintings from the late Middle Ages explores the art of painting in the Northern Netherlands in the fifteenth and early sixteenth centuries. Very few paintings from this period have survived and many of the anonymous artists have been given a name based on their most famous work or their hometown. Until recently far less was known about the painters in the county of Holland than their counterparts in Flanders, nonetheless the painting technique refined in the Southern Netherlands spread quickly to Holland. Haarlem and Delft became important centres with masters who were certainly influenced by Flemish primitives but nonetheless developed their own style. The resulting paintings are typically Dutch scenes such as The Holy Family at Table in a Dutch interior by the Master of the Braunschweig Diptych. The exhibition opens with Geertgen tot Sint Jans and closes with Lucas van Leyden, whose work is still rooted in the Middle Ages but heralds the dawn of the Renaissance in Holland.

Museum Boijmans Van Beuningen has an exceptional collection of late medieval paintings. It is also currently housing the collection of early Dutch masters from the Rijksmuseum in Amsterdam. These paintings are normally never lent to other institutions, but have been moved to Museum Boijmans Van Beuningen because of the extensive renovations at the Rijksmuseum. Together these works form an unmatched collection of paintings from the late Middle Ages. The unique character of this collection has served as a lever for important loans from collections in France, Germany and the United States such as the expressive Entombment by the Master of the Virgo inter Virgines. The panels are so fragile that it is unlikely that such a survey can ever be mounted again in the future.

The exhibition is designed by Ramin Visch to guide the visitor past the artistic highlights in the different cities in Holland. The panels are supplemented with objects dating from that time that can be seen in the paintings. In the same room sixty coloured medieval sculptures from the Schoufour-Martin collection are also presented. Together these paintings, sculptures and objects will offer visitors a rare glimpse of daily life in the late Middle Ages.

The last exhibition of Northern Netherlandish painting around 1500 was held fifty years ago. Since then much more information on the subject has surfaced, leading to fascinating new insights. To elucidate the themes of the exhibition several experts have undertaken new research, the results of which will be published in the accompanying catalogue.