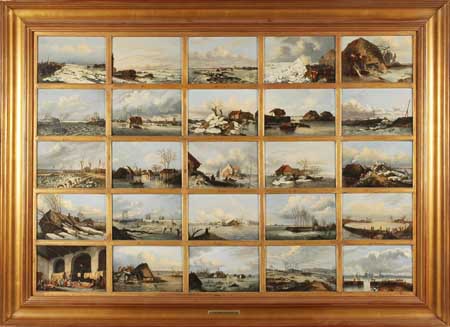 For centuries the Netherlands has been fighting against water, right through to the present day. An exceptional 19th-century painting by the Amsterdam amateur artist Johan Veltens (1814-1894) – purchased by Museum Het Valkhof in early 2007 – is a reminder of one of the worst floods from that period: the flood of 1855. Veltens’ work consists of some 25 small paintings on panel, mounted in a frame, which touchingly depict the consequences of the flood for numerous towns in the Guelders valley and the countryside between the Maas and Waal rivers. The exhibition tells the surprising story behind the painting, a special initiative of the Amsterdam artists’ society Arti et Amicitiae and the role king Willem II played in helping the flood victims. Alongside a number of other paintings, drawings, documents and eyewitness accounts, it brings the flood of some 150 years ago back to life.