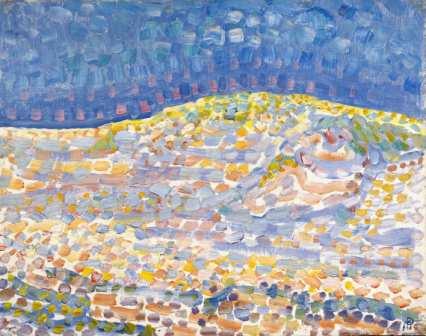 In the early twentieth century, the resort of Domburg in Zeeland had a strong appeal for well-known Dutch artists like Jan Toorop, Jacoba van Heemskerck and Piet Mondrian. The exhibition at the Gemeentemuseum shows how Zeeland sparked one of the most important developments in Mondrian’s career, with its unparalleled light, rugged dunes and ancient woods.
Jan Toorop (1858-1928) first came across the little bathing resort of Domburg in 1903. It was he who drew Piet Mondrian’s attention to its picturesque qualities. In 1908, Toorop showed his Domburg canvases at the annual exhibition of the St. Luke’s artists’ association in Amsterdam, and in doing so influenced the younger generation of members like Jan Sluijters, Leo Gestel, Mies Elout-Drabbe, Jacoba van Heemskerck and Piet Mondrian, who would all soon adopt the Luminist style.

Portray the light
Domburg became the place where they found inspiration in their quest to portray light and make it tangible. At the 1910 St. Luke’s exhibition – held at Amsterdam’s Stedelijk Museum – Mondrian’s Domburg work was the centre of attention. It comprised paintings that he had made in 1909 and 1910, like Summer, Dunes in Zeeland, Sun, Church in Zeeland, House in Sunlight, Zeeland Girl and Zeeland Farmer. These works, in which Mondrian increasingly relinquished realism, shocked the public by their innovative appearance. To prepare for the first exhibition of the Modern Art Circle in 1911, Mondrian travelled to Paris. Here he encountered Cubists like Henri Le Fauconnier, Picasso and Braque. Cubism represented a major step in Mondrian’s efforts to free himself from the confines of visual reality. But the reviews of the Cubist works he subsequently showed at the exhibition (including Dune Landscape) were scathing. The forms were perceived as bizarre; as yet the public could see no deeper meaning in Cubism.

Paris
Between late 1911 and August 1915 Mondrian stayed alternately in Paris and in the Netherlands, where he paid regular visits to Domburg. His 1914/15 Domburg series, with subjects like the church, trees, the sea and groynes, shows a fascinating progression in which Mondrian gradually painted less and less realistically, paring his canvases down to an interplay of horizontal and vertical lines. In time, diagonal and curved lines disappeared from his works, and their titles ceased to reflect their subjects. They were referred to as ‘compositions’, followed by a number or a colour. Mondrian distanced himself more and more from realistic representation, increasingly distilling reality into a theoretical concept. In 1914 Mondrian moved to Laren in North Holland, where he remained until 1919, ultimately settling in New York after periods in Paris and London.