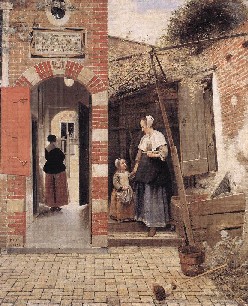 With the exhibition Senses and Sins the Boijmans Van Beuningen Museum presents an important survey of painters of everyday life during the Golden Age, starting with Willem Buytewech (ca. 1620), and ending with Frans van Mieris (ca. 1670). Highlights of this exhibition are three paintings by Johannes Vermeer and works by, amongst others, Adriaen Brouwer, Gerrit Dou, Pieter de Hoogh, Jan Steen and Gerard ter Borch.

The 82 paintings comprising the exhibition are by 22 artists and come from numerous museums in the Netherlands and other countries. All of these artists specialized in specific subjects, and many of them depicted lively, bucolic, refined and sometimes mysterious scenes. In Amsterdam , for instance, there were three painters – Pieter Codde (1599/1600 – 1678), Symon Kick (1603-1652) and Willem Duyster (1599-1635) – who specialized in the kortegaardje genre, which depicts soldiers sleeping or playing at dice in an inn or a barn. Adriaan Brouwer (1605/06-1638), who came from Flanders but worked in Haarlem, was unsurpassed in his depictions of drinking and quarrelling peasants, and who was also a master of facial expression. Adriaan van Ostade (1610-1685) was influenced by Brouwer and specialized in scenes of carousing peasants.

Gerrit Dou (1613-1675), whose most important painting, The Quack, belongs to the collection of the Boijmans Van Beuningen Museum, was already a celebrated artist during his lifetime. Dou was one of Rembrandt’s pupils; he developed a technique which had a strong influence on the Leiden school of ‘precise painters’. Gerard ter Borch (1616-1681), who worked in Deventer, was likewise renowned for his scenes of elegant society. This coming autumn an exhibition devoted to Ter Borch will be staged in Washington. Jan Steen (1625/26-1679) is an extremely well-known painter. The exhibition includes his lively painting The Village School from the National Gallery of Scotland, Edinburgh; also a few of his animated depictions of peasants playing skittles and the ‘egg dance’.

Another great painter was Pieter de Hooch (1629-1684), many of whose works depict mothers going about their daily tasks in poetic interiors. His masterpiece from the Berlin museum shows a mother and cradle, with a beautiful pattern of sunlight on the floor. One of the finest paintings from London’s National Gallery will also be on show: Courtyard of a house in Delft.

Johannes Vermeer (1632-1675) has pride of place in the exhibition with three of his masterpieces. On loan from the Städelsches Kunstinstitut in Frankfurt is his Geographer (1669), famed for its lighting and the detailed rendering of the attributes. Other exhibits are the Woman Writing a Letter, from the National Gallery, Washington, and the Woman Playing the Lute, from the Metropolitan Museum, New York. The female lute-player in this work of 1660 gazes expectantly through the window; the viola da gamba on the floor and the books of music on the table suggest that she is expecting a male visitor.

The exhibition ends with Frans van Mieris (1635-1681). Gerrit Dou’s best pupil is represented by six paintings and may be regarded as the last great seventeenth-century painter of scenes of everyday life. The Duet from the Staatliches Museum in Schwerin is one of Van Mieris’ masterpieces, and bears witness to his influence on Vermeer. 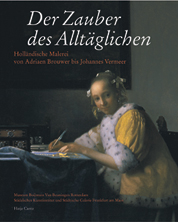 The exhibition is accompanied by an extensive catalogue containing three introductory articles, detailed biographies of the painters and descriptions of the exhibits. The catalogue is published in Dutch, English and German editions.