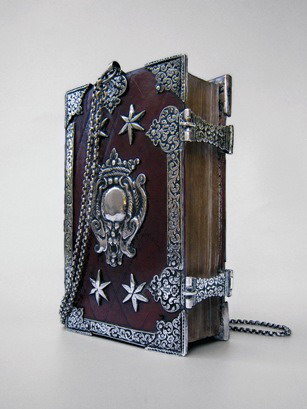 The exhibition Sunday silver: three centuries of decorated church books offers, for the first time, an imposing oversight of decorated church books printed in the Netherlands between 1650 and 1900. There are almost 200 hymn books, bibles and prayer books on show from Protestant, Catholic and Jewish faiths, deriving mainly from the van Noordwijk private collection. The beautiful silverwork on the books is evidence of stunning craftsmanship. The silver clasps and fittings, leatherwork and exquisite gilding are all a pleasure to see. Queen Emma and Queen Wilhelmina’s church books are particularly remarkable; the latter even has a personal inscription. Sunday Silver displays church books from the van Noordwijk collection along with other special or rare examples from Dutch collections such as the Royal Library, the Jewish Historical Museum, the Dutch Bible Society and some university libraries.

For the first time in the Netherlands the Biblical Museum presents in Sunday silver an oversight of the origins, use and form of the gold and silver decorated church books dating from 1650 to 1900. Church books are printed bibles, prayer books and hymn books owned by the faithful who took them to church on Sunday. The books are remarkable due to their handy form and are personal treasures, often incorporating the family coat of arms or the owner’s initials in the silverwork. The handwritten family details, inscriptions and poems bear witness to the religious and family life of their owners and users. Professor Petrus Hofstede de Groot of Groningen (1802-86) presented his nephew with a bible in which he wrote that he “……saw this book as having been the force in his life and support in his old age.” The books were passed on as valuables from one generation to another. The contents of the books vary and consist of religious texts used either during the service itself or as support for personal practice at home. The owner often made a personal selection from, for example, psalms, prayers or hymns from the Old and New Testament and the catechism.

From Moses to Prince Willem V

In the exhibition Sunday silver all aspects of decorated church books are covered, from the process of fabrication to the silversmiths themselves, recognizable from their style or region. Many clasps are decorated with biblical personages and symbolic representations with solid silver bindings depicting the most important events in Jesus’ life. Moses and Aaron were often portrayed and there is a remarkable Lutheran church book with portraits of Prince Willem V and Wilhelmina of Prussia on the clasps. The contents of church books often say something about the place of worship attended by its owner. There is a broad array of Protestant, Catholic and Jewish church books on show in an atmosphere which brings the private and religious lives of the users to life. Rare masterpieces are to be seen, such as the unique 1614 church book with an exquisite white silk binding entirely embroidered with beads and sequins depicting flowers, fruit and animals. The blue velvet royal book mounted with a gold crown and offered to Queen Emma in 1879 at her wedding is also a treat for the eye.

The van Noordwijk collection comprises more than 400 church books with silver and gold clasps dating from 1650 to 1900 and is thus the biggest of its type in the Netherlands. The van Noordwijk couple has been collecting them for more than three decades, demonstrating their taste for diversity and unity of style, history and background. Their interest was awakened 35 years ago when Mrs van Noordwijk was given a bracelet fashioned out of a church book clasp. They were fascinated by the wealth and refinement of the ornamentation and decided to search for unique holy books. Over the years they bought many from antique shops, private owners and at fairs in the Netherlands and abroad, thus building up enormous expertise in the matter. They say themselves “We consider it is more than collecting; we feel that this heritage should be cherished.” Bernard van Noordwijk has not only lent out his collection, but also worked as a guest curator for Sunday silver. The nature and extent of his collection, supplemented with rare or special holy books from Dutch museums and libraries, have made it possible for the first time to create an exhibition of printed church books decorated with silver or gold as used by many of the Dutch between 1650 and 1900.

Jongbloed Publishers have brought out a highly illustrated and beautifully designed book, Sunday silver, to accompany the exhibition, with the format and appearance of a church book in which the Dutch decorated holy book is systematically covered for the first time. Attention is paid to the silversmiths’ craftsmanship, the book bindings, the symbolic representations on the clasps and their use in daily life in Jewish and Christian faiths.
Bernard van Noordwijk, editor-in-chief, and Hermine Pool (Biblical Museum curator)
Layout: Krijn van Noordwijk
Ca 400 stitched and bound pages
ISBN 90-6126-681-5