Last week American bank JPMorgan Chase & Co laid claim to the art collection of Dutch businessman Louis Reijtenbagh. This week Dutch bank ABN AMRO sued the businessman as well, again to secure his art collection, which had been put up as collateral for a loan.

Among the paintings claimed by the banks is The bend in the Herengracht which the Rijksmuseum recently bought from the businessman. The Rijksmuseum, together with the Dutch Ministry of Education, Culture and Science are investigating the legitimacy of the claim on this painting.

Another painting which is now claimed by two banks is a Self portrait by Rembrandt from 1632, with an estimated value of 10 million dollars (€ 7.7 million). The whereabouts of this painting is unknown.

The uncertainty about the status of the Rijksmuseum’s Berckheyde remains as Morgan Chase too still holds its claim on the collection. The court did not want to address the possible conflicting interests of both banks, although Morgan representatives were present at the hearing. 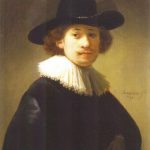