Since last Sunday, 9 October, one of the largest paintings in the Netherlands is back on view after being in storage for most of the past century. The painting by Matthieu van Bree shows the entrance of Napoleon into Amsterdam on 9 October 1811. It shows the Amsterdam magistrate handing the keys to the emperor, who is accompanied by some of his most famous generals.

The painting has been rolled up for a long time. This episode in the history of Amsterdam was viewed as a painful surrender to foreign forces. As a result of the long storage the painting is in need of restoration. After the first phase is completed, the public is asked to support the second phase of the restoration in a crowdfunding campaign. On the museum’s website you can sponsor a specific part of the painting. 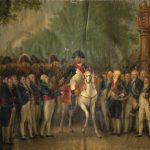