On 20 August 2011 Art Museum Riga Bourse, in Riga, Latvia will hold its opening ceremony and on 22 August the doors will be opened for museum visitors.

Latvian cultural life will be enriched this year by a long awaited event: the opening of Art Museum Riga Bourse. The museum is the new incarnation of the former Museum of Foreign Art and although visitors will recognise the collections of the former museum in the displays, the basic exhibition gallery of paintings will be dominated by Dutch and Flemish paintings of 16th – 17th century, the working style has a new attitude to specialisation.

The museum is positioned as a point of cultural exchange where excellence is more important. The museum wants to be a point of contact between East and West as well as for dialogue between the classical and the contemporary in the sense of both exhibits and form of perception. Another aspect of the new museum is harmony between the acquisition of knowledge and recreation as well as the breaking down of barriers between various forms of culture.

The opening ceremony of Art museum Riga Bourse will take place on 20 August, and on 22 August the doors will be open for museum visitors, to enjoy the very first exhibitions of the new building. First there is Glasstress Riga that was initiated by the Berengo studion on the island of Murano gained recognition in Venice and will also take place in Venice in 2011 in parallel with the art bienalle. The second exhibition is Oriental Porcelain and the Netherlands, the interaction of East and West in the 17th century. The exhibition was conceived with the desire to show the interaction between East and west within the field of porcelain throughout the 17th century. 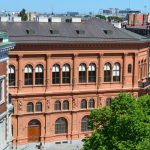