Works of art and their display have always been closely connected. Most art was and is created for exhibition in one form or another, and the history of the display of an art object often forms a meaningful part of its story. Exhibiting art involves strategies, techniques and devices that have much in common with other fields of presentation: theatre, advertising, interior design, book design, the display of goods in shops and shop windows. These display strategies use techniques that are partly culturally determined, and partly rooted in a biological determination of human perception, as Gombrich, among others, made clear. How we perceive patterns, prefer symmetry and note differences of scale between an object and its surroundings all have a direct bearing on the way art was and is shown. Moreover, changing modes of display and viewing conditions can create new narratives and can even lead to active or performative relationships between the displayed object and the viewer, resulting in playful (or sometimes aggressive) interactions. Finally, rules of decorum and rhetoric often play an important role in the art of display.

Often unwritten, such rules are partly determined by the intrinsic qualities – size, shape, material, colour or composition – of works of art. Just as important is the decor against which an artwork is shown: the mise-en-scène with its supporting, decorative elements (or with a complete lack of decoration: the white cube, for example). The hierarchy in the arrangement of works of art in relation to other art objects is another factor (be it in a church, a Kunstkammer, studiolo or cabinet, a museum gallery, exhibition hall, or outdoor space). The context of the particular site affects the meaning of an artwork. In addition, the ‘instruments of display’ – frames, pedestals, display cases and other furniture, architecture, lighting – mark the boundaries between the artwork and its surroundings, between the real and the representational space.

Apart from exhibiting works of art, other, more abstract forms of display often involve art, for instance ‘displaying of the self’ through the self-portrait; the ‘display of identity and gender’ through clothing, behaviour, etiquette, accessories and cosmetics; the ‘display of (political and dynastic) power’ through symbols (regalia, heraldry) that use the visual arts and architecture to create grandiose decors. In part, this kind of display of power is rooted in the elaborate court culture of the Burgundian and Habsburg Netherlands in the 15th and 16th centuries and culminates in the ‘fabrication of Louis XIV’ in Baroque France.

Volume 65 of the NKJ will be devoted to the display of art within the visual culture of the Netherlands. We invite proposals that examine and conceptualize the history, meaning and techniques of exhibiting works of art in the Low Countries from the medieval and early modern periods up to the 21st century. The focus will not be on the artwork – unless the object is analysed as an agent of display itself – but on how it is presented, on its intended context and, particularly, on how the relation between the work of art and its surrounding space manifests itself in various meaningful ways.
Topics could include the (history of) presenting individual artworks or collections of art; the history of art exhibitions and museum displays; museum and gallery architecture, from art cabinets to painting galleries and sculpture pavilions; hierarchies in the presentation of art; the artist as organiser of the display of his works; the history, role and effects of ‘instruments of display’ (frames, pedestals, vitrines, art cabinets, chimneys, buffets, tables and other ‘show furniture’ for the display of dinner services and objets d’art); possible relations between artistic display and interior design; artists involved in extra-art endeavours, such as designing the setting of dinner tables or arranging shop windows; royal entries as displays of power and pride; decorative elements as essential parts of display strategies; or the artwork as its own agent of display.

The NKJ is dedicated to a particular theme each year and publishes articles that employ a diversity of approaches to the study of Netherlandish art. Contributions to the NKJ (in Dutch, English, German or French) are limited to a maximum of 7,500 words, excluding the notes.

The deadline for submission of proposals is 1 January 2014. Selection of proposals will take place in January and February 2014. The deadline for submission of the full articles for consideration and editorial comment is 31 May 2014. Final decisions on the acceptance of any paper will be made by the editorial board following receipt of the complete text.

Proposals for papers, in the form of a 300-word abstract and a short CV, should be sent to: 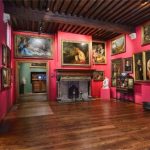