Home to such masterpieces as Rembrandt’s The Girl at the Window, and Van Dyck’s Samson and Delilah, the Dulwich Picture Gallery boasts a world-class collection of seventeenth and eighteenth century artworks and certainly, one of the most comprehensive in London. Despite such, the Gallery’s Dutch and Flemish collection has never before been documented.

The project was made possible through the extensive research and tremendous effort by leading Dutch scholars, Dr. Ellinoor Bergvelt and the late Michiel Jonker (1947–2014). As guest curators at the Gallery, they hosted a CODARTfocus meeting in December 2013. This day allowed the authors to review their latest research. According to Bergvelt “the CODART visit proved to be a useful opportunity to discuss our attributions and reflect on our ideas with a large group of colleagues”.

The catalogue will be formally launched at the Discovery Day: The Dutch Golden Age, which will take place in the Dulwich Picture Gallery on 10 October 2016. The event coincides with exhibition Adriaen van de Velde: Dutch Master of Landscape, which will open to public on 12 October 2016. 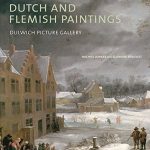