The Centraal Museum in Utrecht and the Stedelijk Museum in Amsterdam have jointly acquired an important work by the Dutch architect and furniture designer Gerrit Rietveld: a child’s highchair designed in 1918 and executed in 1921-22. This acquisition provides insights into Rietveld’s development of the Red Blue Chair – an iconic object in Dutch art history.

The acquisition was made possible with funds from the Mondriaan Foundation, the Rembrandt Association and the K.F. Hein Fonds. On Thursday 4 December the chair was added as the 126th exhibit to the exhibition 125 Favourites in the Van Gogh Museum.

Gerrit Rietveld (Utrecht 1888-1964) was one of the most innovative figures in the history of twentieth-century architecture and design. The highchair is considered a key work in Rietveld’s oeuvre because its construction and colouring anticipate the design of his famous Red Blue Chair, which was also designed in 1918 but was given its characteristic colouring only in 1923.

The magazine De Stijl published a design for the highchair in 1919 together with Rietveld’s explanation of the colouring (then green, light green and red) and the experimental construction using dowel joints. Rietveld designed the illustrated chair for H.J. Schelling’s first child, born in 1918. This chair has since been lost.

No single extant piece of furniture was known from this crucial phase of Rietveld’s development until a second highchair was offered at auction at the end of 2006. The chair, made for Hendrikus Johannes Witteveen who was born in 1921 and later became Minister of Finance, seems to be identical to the chair made for Schelling. The only surviving photographs of the chair from this period show Witteveen sitting in it as a child. The dating of this chair to 1921 provides essential information about Rietveld’s development in this period in which he experimented with the primary colours. This information is of great importance for research into his early development because relatively few of his works from this period can be dated exactly.

As far as is know, this highchair is the only surviving piece of furniture from Rietveld’s transitional period in which he left behind the simple, closed forms of his early work – inspired by Frank Lloyd Wright, Berlage and others – in favour of a revolutionary spatial design allied to the avant-garde group De Stijl.

This acquisition ensures that an important part of the Netherlands’ cultural heritage has been preserved for the nation. The Centraal Museum and the Stedelijk Museum will exhibit the chair alternately for six-month periods; research and conservation will be carried out jointly. The collections of the Centraal Museum and the Stedelijk Museum offer an almost complete overview of Rietveld’s work in the fields of architecture and design. 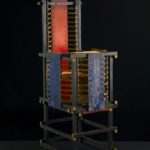