Since December 7, Ilona van Tuinen is Assistant Curator at the Morgan Library & Museum in New York. She is responsible for the Northern European (Netherlandish, Dutch, Flemish, German, and Scandinavian) drawings and prints of 1400-1900 as well as the drawings in major American private collections that are promised gifts to the Morgan.

The Morgan Library & Museum is home to one of the most distinguished collections of Northern European works on paper in the world and Ilona feels very privileged to have joined its curatorial team. Her main tasks include researching the drawings that were acquired after the publications of Felice Stampfle’s 1991 catalogue of the Morgan’s Netherlandish and Flemish drawings and Jane Turner’s 2006 catalogue of the Morgan’s Dutch drawings, and organizing exhibitions based on that and other material. Together with her colleagues in the department of Drawings and Prints, she is also part of the team that plans the program for the Drawing Institute, a research center for the study of drawings with several annual lectures, study days and fellowships.

After studying art history at the University of Amsterdam, Ilona worked at Museum De Lakenhal in Leiden in 2010-2011 on the monumental exhibition Lucas van Leyden and the Renaissance. Between 2011 and 2014 she worked at The Leiden Collection in New York, where she served as Assistant Curator and co-authored the collection catalogue, and from 2014 until 2015 she was Assistant Curator at the Fondation Custodia, Collection Frits Lugt, in Paris. Her publications include articles in Simiolus and JHNA, and a facsimile edition with separate commentary volume of the so-called Berlin Sketchbook of ca. 1520-1535, the earliest surviving Northern Netherlandish sketchbook. 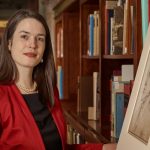