Five paintings, in the collection of museum Ons’ Lieve Heer op Solder since 1961 have now been attributed to Rombout Uylenburgh (ca. 1585 – 1628). The panels show scenes from the youth of Christ. Rombout Uylenburgh, a painter who worked predominantly in Cracow and Gdansk in Poland, was the brother of Hendrick Uylenburgh, one of the most important art dealers in Amsterdam in the seventeenth centuryand a cousin of Rembrandt’s wife Saskia.

The discovery was made in the course of the research for the RKD project Gerson Digital part I: Poland. Researchers from the RKD encountered an unpublished book of drawings of the first half of the 17th century in a private collection, containing 15 drawings by Rombout Uylenburgh. This book of drawings provided the key to the attribution of the paintings in Ons’ Lieve Heer op Solder.

For years the museum had tried to identify the painter of the five grisailles. Uylenburgh had been considered before, after the Rembrandthuis in Amsterdam had bought two other grisailles by the painter in 2009.

Two of the five works are exhibited at the RKD in The Hague for the coming weeks. the other three are on display in the 17th-century hidden church Ons’ Lieve Heer op Solder in Amsterdam.

For the article by Erik Löffler (RKD) on the discovery consult the first part of Gerson Digital here. 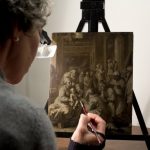