The Alkmaar-based charity institution the Dr. Hofsteestichting celebrates its 50th anniversary by donating a painting to the city of Alkmaar. The painting, The siege of Alkmaar by Herman ten Kate (1822-1891) will get its pace among the other paintings in the collection of the Stedelijk Museum Alkmaar depicting the siege by the Spanish in 1573

On The siege of Alkmaar Ten Kate depicted the attack of the Frisian Gate (Friese Poort) by the Spanish assailants on 18 September 1573.Originaly the piece was painted for the Amsterdam society Arti and Amicitae, as part of a historical gallery housed there until 1895. After the second world war it was acquired by Hendrik Hofstee, who was then the director of an insurance company. 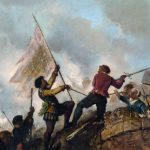 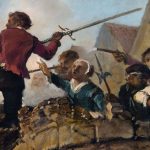 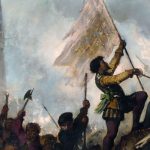