One of the most significant works in the Krannert Art Museum’s collection of European art, The Artist with a Fortune Teller in a Landscape by David Teniers II has been treated by conservators. Works by Pieter de Hooch and Joos van Craesbeek were also treated.

Information from the museum, 9 September

The recent conservation work removed varnish that had darkened and was obscuring the color and details of the paintings. It also removed paint that had been added to cover areas of paint loss but that no longer matched the original paint, and repairs were made to damaged areas of the paintings. When the Teniers painting was being moved a few years ago, some of the gilding on the frame began to crumble. The frame was sent to the restorers at Eli Wilner & Company in New York City, who preserved as much of the original gilding as possible and touched up any areas where the gilding was lost.

A Woman Feeding Her Child and Paying a Servant by Pieter de Hooch, had serious issues. Some of the paint was starting to lift off the canvas, creating ridges in the paint. The conservator used a vacuum table to draw warm, moist air through the canvas from front to back, which makes the paint lie flat and readhere to the canvas, Warren said. “With this treatment, you can now see details that were completely obscured. There’s a painting on the back wall (that couldn’t be seen before). You can see all the walls of the room now, instead of just the figures in the foreground,” she said. “It’s a work that really came back to life.”

The seventeenth century Flemish painting, The Coin Collector by Joos van Craesbeeck, was painted on an oak panel with a natural curvature that allows it to swell and contract in response to changing humidity. Nails on the sides of the panel restricted this movement, causing the panel to start to crack. The oak panel was reframed properly.

The conservation work was paid for by the Trees Conservation Fund. The Trees family, for whom the gallery displaying the Teniers painting is named, donated both artwork and money for conservation. 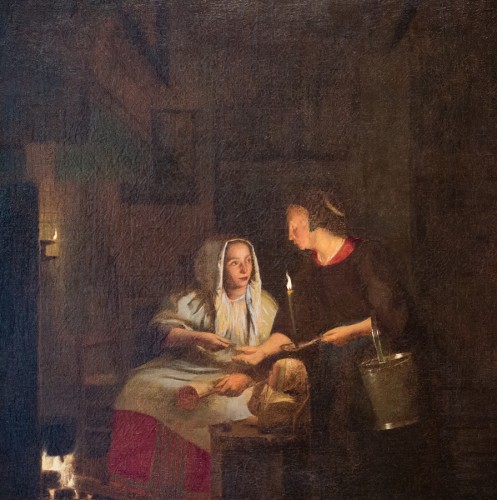