Rembrandt’s study of a model for Jesus makes its Dutch museum debut at The Rembrandt House Museum, for the first time since it last hung in Rembrandt’s salon nearly 360 years ago. The painting, which was also part of the 2011 exhibition Rembrandt and the Face of Jesus in Paris, will go on display in Amsterdam on Friday 8 July 2016.

In a reaction to the Dutch national newspaper Het Parool, David de Witt, Senior Curator of The Rembrandt House Museum explaines how he believes the study is by Rembrandt and that this painting is one of the two studies of Christ that had hung in the Salon of the artist.

Information from the press release, 5 July 2016

On a small oak panel Rembrandt studied the head of a man with long black hair and a flowing black beard. His model – whose identity remains unknown to us – was very likely one of the young Jewish men living in Rembrandt’s neighbourhood. Rembrandt chose him because of his striking appearance. He was looking to develop a new type of face for Jesus. It was still based on tradition, but now also on study from life. He would use this type in several major works of the late 1640s: the Hundred Guilder Print, and painting of Jesus and the Disciples at Emmaus of 1648 now in the Louvre.

The visitor can now view this painting in the room where the artist kept it, the Salon. The inventory taken when he went bankrupt in 1656 lists two “Cristus tronie door Rembrant” (Christ’s head by Rembrandt). This is one of two such paintings known, with the other in Berlin. Of course this does not mean that the artist studied Jesus himself, but instead that he was studying a live model. Already in his Leiden years, Rembrandt studied the human face intensely, in order to depict human emotions convincingly. Here he applied the same approach – study from life – to the depiction of Jesus. Observation from life was core to Rembrandt’s work, and he showed both of his studies for Jesus in the most important room in his house. Generously lent by a private collector who wishes to remain anonymous, this work first resurfaced for the public in 2011. This is its first appearance in The Netherlands. 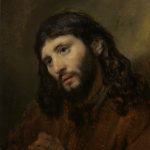 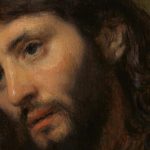