The Khanenko Art Museum in Kyiv has been damaged as a result of a missile strike on Monday, 10 October 2022, according to a report in The Art Newspaper. Russia launched more than 80 missiles towards multiple Ukrainian cities killing at least nineteen people.

Ukrainian President Volodymyr Zelensky said in an address to the nation that cultural sites were targeted and that “there is a playground in Shevchenko Park, which also became a target for a Russian missile. But it is not just in Shevchenko Park. It is on one of the main museum streets of Kyiv. In particular, the Khanenko Art Museum was damaged by this attack by terrorists.” The photo below was posted to Telegram by Kyrylo Tymoshenko, Deputy Head of the Office of the President of Ukraine, and shows the museum with damaged windows and shutters. 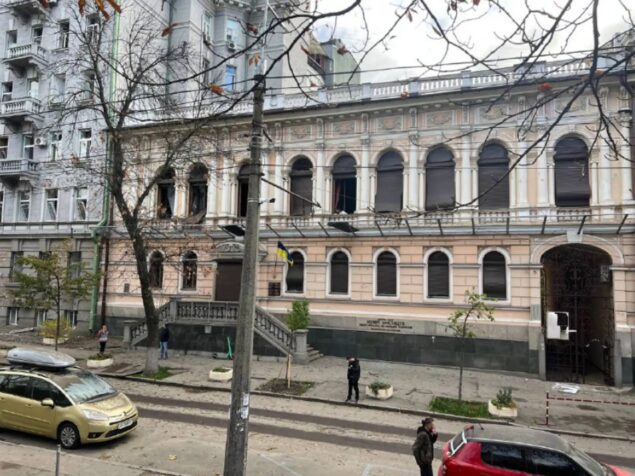 The Khanenko Museum on Monday 10 October (photo by Kyrylo Tymoshenko)

The Khanenko Art Museum is known for having a substantial collection of European art, including a panel by Rubens and paintings by artists from the circle of Jheronimus Bosch. The graphic collection includes prints by Rembrandt, Dürer and Lucas van Leyden.

The museum wrote on Twitter that no personnel were injured in the attack and that damage is currently being assessed. The collection has been secured in a safe place since the beginning of the war.