Thanks to a news item on CODART, posted October 2015, a lost flower still life by Balthasar van der Ast has been found after thirty years.

The Aachener Zeitung, a local German newspaper, reported yesterday that a diamond expert from Bonn saw the painting when visiting a private collector for the art related German television show Bewerten und Verkaufen. Struck by the quality of the still life, he searched the internet and came across the news item on CODART. On behalf of the painting’s owner he contacted Sarvenaz Ayooghi, curator of the Suermondt-Ludwig-Museum in Aachen. The owner, who wishes to remain anonymous, has generously agreed to lend it to the museum for the upcoming exhibition on Balthasar van der Ast.

In March the Tulip in a Glass Vase will be one of the highlights of the exhibition More beautiful than nature: The Still Lifes of Balthasar van der Ast. This monographic exhibition brings together forty of the artists’ best paintings and high quality gouaches. It is scheduled to open in Aachen on 10 March 2016, after which the show travels to the Herzogliches Museum in Gotha to open on 3 July 2016.

Balthasar van der Ast (1593 or 1594 – 1657), a Golden Age painter born in the Dutch city of Middelburg, specialized in still lifes of flowers, fruit and sea shells. He painted this Tulip in a Glass Vase in 1625, during the height of the Dutch tulip mania, which lasted until 1634. The still life may be regarded as one of the finest paintings by Van der Ast. After being sold to a private collector in 1980, it was last seen in public during the 1984 exhibition Masters of Middelburg.

Do you want to have a news item published on this website? Feel free to send an e-mail to the webmaster. 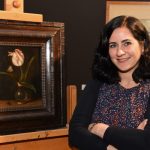 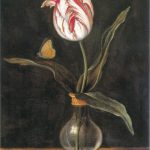