Carmen Calvo, the Minister of Culture, formalized the assignment of Juan de Flandes’ panel painting of the Crucifixion to the Museo del Prado. Present at the event were the president of the Royal Board of Trustees, the director of the Spanish State Taxation Agency and the president of the Ferrovial group. This masterpiece of Spanish Renaissance art and a work of great significance for the Prado, has been accepted by the state in lieu of Ferrovial’s taxes, equivalent to 7 million euros. 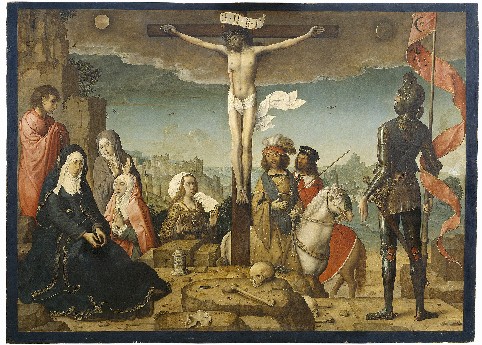 The Museo del Prado received the formal assignation of Juan de Flandes’ painting The Crucifixion in a meeting led by the Minister of Culture and in the presence of Rodrigo Uría and Rafael del Pino, presidents of the Museum’s Royal Board of Trustees and of Ferrovial respectively, Miguel Zugaza, Director of the Museum, and Luis Pedroche, Director of the Agencia de Administración Tributaria. The panel, a masterpiece of both Hispano-Flemish painting and within the oeuvre of this painter, was in a private collection. It was acquired some months ago by Ferrovial to be donated in lieu of tax amounting to 7 million Euros. From today and for the next two weeks, the painting will be displayed in the Adriadne Rotunda of the Museum in order for the visiting public to have a chance to appreciate it before it is sent to the Museum’s restoration department where it will be cleaned.

Juan de Flandes was born and trained in Flanders, as his name indicates. He is known from the works that he produced from 1496, when he arrived in Castile and became court painter to Isabella the Catholic. Following the death of the queen in 1504, Juan de Flandes remained in Castile but was obliged to adapt himself to the demands of new sorts of commissions for major altarpiece of larger scale and in greater quantity than the works he had previously executed as court painter. Dating from this last period of his career are the paintings for the high altar of the chapel of Salamanca University (almost all lost), for the chapel of San Miguel in the cloister of the old cathedral in Salamanca, for the high altar of the church of San Lázaro, and for the high altar of Palencia cathedral. The Crucifixion formed part of the latter work.

The origins of The Crucifixion

The Crucifixion by Juan de Flandes (? – 1519) is one of the great masterpieces of Hispano-Flemish painting. Despite being relatively unknown – it has only been seen in public on a few occasions – this is a securely documented work. By the time the artist received the commission to execute the paintings of this altarpiece for Palencia cathedral in December 1509, Felipe Bigarny, the other artist commissioned with this project, had already completed the sculptures. Given that his panels would form part of a large-scale altarpiece in which painting had to compete with sculpture, Juan de Flandes conceived three panels for the predella: Christ on the route to Calvary, The Burial of Christ, and The Crucifixion in the centre. Together they formed a sort of triptych, which was highly unusual in an altarpiece of this type due to its horizontal format. The three scenes were larger and different to the other panels that the artist painted for the altarpiece due to their extraordinary luminosity and pictorial quality and for the originality of the compositions. The Crucifixion was the focus of attention in the whole altarpiece as it was the most visible part and closest to the priest and the worshipper. Along with the other two scenes (still in the cathedral), it can be considered Juan de Flandes’ last great work, totally different to other paintings of this period after he had ceased to be court painter.

In the contract signed by the artist on 19 December 1509 to execute the paintings for the high altar of Palencia cathedral, Juan de Flandes agrees to execute the paintings by his own hand. In The Crucifixion the figures are structured in a semi-circle to draw attention to the crucified Christ, emphasised by a broad landscape dominated by the intense sky. The composition has a remarkable compositional complexity rarely found in Hispano-Flemish painting due to the masterly way in which the artist combines three elements rarely found in other works of this school and period: figures, landscape and still life. Also worth noting is the manner in which the artist conceived the space, using a low viewpoint that recalls the compositions of Andrea Mantegna (1430/31-1506), and his manner of arranging the figures, which gives the work its Italianate air. Only the Virgin and a few followers remain around the body of Christ, along with the other characters who converted after his death. The first group, comprising Mary, Saint John, Mary Magdalen and the two Holy Women, occupy the left side of the panel, while notable on the right among the second group is the centurion on horseback behind Christ and the soldier in the foreground. He stands with his back to the viewer and wears contemporary armour. Particularly striking is the interest paid by Juan de Flandes to the representation of the emotions of each character and the great attention to detail, such as Christ’s long hair, the trappings of the centurion’s horse and the skulls, as well as the jewels scattered on the ground at the foot of the cross.

The paint surface of this painting is remarkably well preserved in comparison to many works of this date and a recent x-radiograph has revealed that paint losses are minimal. Nonetheless, and due to the fact that the painting shows a certain degree of opacity due to a normal deterioration of the varnish covering the painting arising from its oxidation and from accumulated dirt, the Museo del Prado is planning to clean the painting before it is put on permanent display. In addition, infra-red reflectography has revealed the detailed under-drawing, as well as some changes to the composition with respect to the final version. These confirm the care with which Juan de Flandes executed this work, to the extent that he did not hesitate to modify his original ideas in order to achieve his aims, without losing the essential relationship between this panel and the other two flanking it, in which he worked in a similar manner.

A major addition to the Museo del Prado’s collection

The present panel by Juan de Flandes can be considered an exceptional work: a documented, fully autograph painting and one of his finest creations, combining the influences of Mantegna with the artist’s own Flemish tradition. As an addition to the collection of the Museo del Prado, it can be considered a major work among the paintings executed in Spain in the period of the Catholic Kings. In fact, this part of the Museum’s collection, from the Romanesque to the Early Renaissance, is the weakest area with regard to gaps and to the quality of its holdings within the overall collection of the Museum. While the Museo del Prado has four other panels by Juan de Flandes, they are not of the same quality and importance as this Crucifixion, once more emphasising the significance of its addition to the Prado’s collection.