Museum Catharijneconvent has other paintings by Abraham Bloemaert, including a large altarpiece, the Crucifixion (1629), and a tondo, Angel Flying with a Banderole (1615-20), as well as some drawings, an original copperplate and 43 prints. The museum also holds several works by his Utrecht pupils, such as Dirck van Baburen, Gerard van Honthort, Jan van Bijlert and Bloemaert’s his eldest son, Hendrick. Abraham Bloemaert is considered the ‘Father of the Utrecht school of painting’, as he trained and educated a great many Utrecht painters. The latter include the artists already mentioned here above, as well as the Caravaggist Hendrick ter Brugghen and the Italianists Jan Both, Cornelis van Poelenburgh and Jan Baptist Weenix. Not only the number of students, but also the many paintings and drawings, published as prints, have contributed to Bloemaert’s widely spread influence on the art of painting and drawing. His oeuvre comprises more than 200 paintings, about 1500 drawings and over 600 engravings. Bloemaert has been of great importance to Dutch art history. He is buried in the Catharinakerk in Utrecht, the church adjacent to Museum Catharijneconvent.

The altarpiece that now has found a permanent resting place, so close to that of the artist who created it, is a remarkable painting in his oeuvre. No other work by Bloemaert is as explicit a statement of Catholic doctrine as this one. The four large ecclesiastics are shown disputing the Eucharist, while putti hover above them and heaven bursts open. On the left, St. Augustine, in Episcopal robes, exposes the dogma of transubstantiation, pointing at the Eucharist and turning to the beholder. The half-nude, ascetic St. Jerome makes a point to his two interlocutors. Bishop Ambrose scrutinizes the writings about the dogma by pope Gregory, who is looking in the direction of the Eucharist. The two protagonists are the monumental, standing Augustine, opening the composition on the left, and the seated Gregory, shown according to custom as a pope, surrounded by folios. The host in the monstrance blocks out the figure of Christ in the painting of the Last Supper behind it. The Holy Spirit descends upon the book.

In the case of the impressive robes of St. Augustine, Bloemaert was inspired by a famous relic, preserved by the Utrecht Catholic community of which he himself was one of the most prominent members: the 15th-century cope of David of Burgundy, Bishop of Utrecht from 1456 to 1496 (see the illustration). The cope of David of Burgundy is one of the highlights in the collection of Museum Catharijneconvent and on permanent display. From 4 September 2011 onwards, it will be shown near Bloemaert’s altarpiece in a presentation dedicated to this new acquistion.

From print to painting

According to Roethlisberger, The Four Fathers of the Latin Church (1632) is the only known case in Bloemaert’s oeuvre of an autograph painting repeating a print, designed by him – accordingly it is in the same direction (see the illustration). Besides the brilliant colouring, the main difference with the print concerns the upper part of the composition, where ten small angels replace the two large ones of the print. The celestial sphere is thus reduced, making the image appear taller and increasing the emphasis on the figures and the Eucharist.

The theme of the Latin Church Fathers discussing the Eucharist goes back, ultimately, to Raphael’s Disputà. Reproductive prints of it provided Bloemaert with inspiration for the poses and for the books on the floor. The Council of Trent stressed the doctrine as an article of faith, whereupon the subject of the Church Fathers, individually or engaged in a discussion, gained a renewed actuality. There a not many examples of art works in which the four Fathers are united in one image in front of the Eucharist. A famous example is the majestic altarpiece painted by Rubens in c. 1609 for the Holy Sacrament chapel of the Antwerp Dominican church (now St. Paul), where it still is. Bloemaert must have known the composition and certainly knew Rubens personally, who visited his atelier in Utrecht in 1627. In his monograph, Roethlisberger states Bloemaert appears to be the only Dutch painter to have treated the subject, doubtlessly for a Catholic patron.

The commission of this monumental canvas does not appear to be recorded, but it has all the characteristics of an altarpiece and was almost certainly intended as such.

While the original destination of this altarpiece remains to be established, the Dutch inscription leaves no doubt that it was done for the Netherlands. The painting was very likely bought by Robert Hampden Trevor (1706-1783), later first Viscount Hampden, while living in the Dutch Republic from 1734-46 as British Minister at The Hague (his wife was Dutch) and brought to England soon after. The altarpiece will have passed to his brother, Richard Trevor, bishop of Durham 1752-1771, who spent lavishly on Auckland Castle and collected major paintings which he bequeathed to the see of Durham. It was certainly with the bishops of Durham at Auckland Castle by 1834, where it is mentioned as hanging in the dining room. The painting remained at Durham until sold in London (Sotheby’s) on 6 December 1972. The reproduction in the sale catalogue shows the altar with the chandeliers and monstrance obliterated with overpaint. This overpainting probably occurred during the 18th century when it was brought to England, so as to reconcile it with the doctrine of the Anglican church, which used neither altars nor monstrance. The painting was still, however, of overtly Catholic subject matter and so, despite these changes, it is still most surprising that it was deemed appropriate to the Bishops of Durham. The overpaint was removed in 1983. The fact that this most Catholic of paintings by Abraham Bloemaert, with the change, functioned in a different religious context for over two centuries, makes it a valuable addition to the collection of Museum Catharijneconvent with focuses on the diverse history of art works with a Christian subject matter. 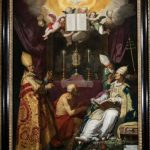 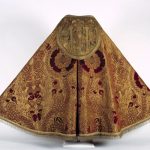 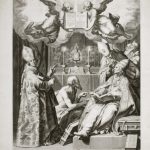