In the Netherlands April 30 traditionally is Queen’s Day, celebrating the birthday of H.M. Queen Beatrix of the Netherlands. As of 22 April 1992 the Kingdom of the Netherlands established diplomatic relations with the independent Republic of Georgia and so laid down the foundations for political, economic and cultural bilateral relations between the two countries. To further strengthen the cultural ties between the two countries the exhibition is presented at the Simon Janashia Museum of History of the National Museum of Georgia on the occasion of these two dates. A selection has been made of 17th- to 19th-Century Dutch paintings from the storerooms of Shalva Amiranashvili Art Museum of the National Museum of Georgia, which represents the treasury of the museum collection.

For more information please visit the exhibition’s page on this website. 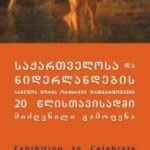