From the museum’s press release, 6 September 2012

Nationalmuseum’s extensive collection of Dutch old masters has been enriched with the addition of a leading work by Jan Lievens. The painting of Saint Paul is dated 1627–1629 and was originally part of the Sparre collection. This is one of Nationalmuseum’s most significant acquisitions of recent years.

Jan Lievens (1607–1674) was born in Leiden, where he joined the studio of Joris van Schooten in 1615, before moving to Amsterdam to work under Pieter Lastman around 1619–1621. In the late 1620s, Lievens worked closely with Rembrandt, which is why their works can sometimes be difficult to tell apart. In 1632, Lievens travelled to England, where he received several commissions from the English Royal Court, after which he moved to Antwerp, where he joined the city’s Guild of St Luke. From 1643 until his death in 1674, Lievens lived and worked mainly in Amsterdam, with the exception of occasional stays in The Hague and his birthplace of Leiden.

The monumental St. Paul is a typical work by Lievens from the period in Leiden when he worked closely with Rembrandt. Similarities with Rembrandt’s paintings from the same time, which is around 1627–1629, can be seen in terms of both subject and composition, but also in the way that Lievens uses light. This painting is a case in point, with its subject of the apostle in half length, its powerful application of light and shadow, with a light source illuminating the scene from the left, and the realistic, empathetic depiction of St Paul’s wrinkled face and hands. St Paul is portrayed by Lievens as a learned old man who is deep in thought as he continues writing in a large open book.

Research into Jan Lievens’ painting of St. Paul has dated it at around 1627–1629. The work originally came to Sweden through the prominent art collector Gustav Adolf Axelsson Sparre (1746–1794). The Sparre collection is considered to have been one of the best in the country during the 18th century, ranking alongside those of King Gustav III, Queen Lovisa Ulrika and Count Carl Gustaf Tessin.

Nationalmuseum has been able to purchase this important painting by Jan Lievens with the help of a donation from the Wiros Fund. The acquisition from the art collection at Wanås Castle, where the remaining works of the Sparre collection are housed, is one of the museum’s most significant of recent years.

The acquisition is on show in the Dutch and Flemish 17th Century painting gallery on the second floor. 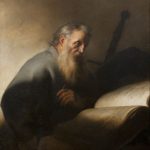