Michael Huijser (47) has been appointed director of the Rembrandt House Museum in Amsterdam with immediate effect. He succeeds Marie-José Grotenhuis, who has acted as interim director of the museum, Rembrandt’s former home, since August 2012.

The Supervisory Board is delighted with the arrival of the new director. ‘Michael Huijser’s arrival will enable the museum to further strengthen its position as one of the most important museums in the Netherlands with international stature as the Rembrandt knowledge centre. As a true museum man, Michael is outstandingly qualified for this role,’ said chairman Ruud Nederveen. 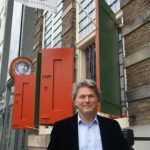