On 2 June 2004 the Szépmüvészeti Múzeum in Budapest is inaugurating the installation of its extensive new galleries for Flemish painting. Following the opening on 29 March of the new Dutch rooms, the museum is now able to show a worthy permanent display of its important paintings from the Low Countries. 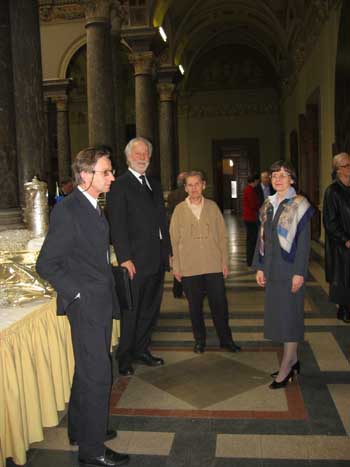 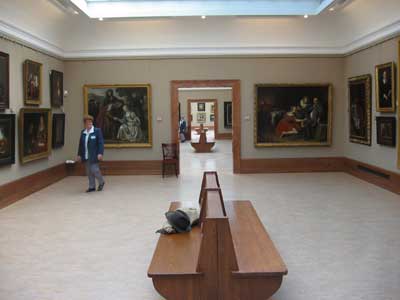 Rudi Ekkart and Gary Schwartz with Teréz Gerszi and Ildikó Ember at the reception for the opening of the new Dutch galleries of the Museum of Fine Arts, Budapest, 29 March 2004.

On 2 June new rooms for Flemish painting are being taken into use. The ceremony on that day is entitled "Korai németalföldi és flamand festészet a 15-17. században" (Dutch and Flemish painting from the 15th to the 17th century) and covers the entire project, for both schools. The invitation to the opening is issued by Miklós Mojzer, Lajos Vass, state secretary of the Hungarian Ministry of Cultural Heritage, Marc Trenteseau, Ambassador of Belgium in Hungary, and Walter Moens, representative of the Flemish community. The Minister of Culture of the Flemish Community, Paul Van Grimbergen, will also be in attendance.

Specific information on the Flemish rooms is lacking at this moment. The museum brochure on the Dutch collection contains the following information that is also applicable to the Flemish holdings:

The abundant artistic production of the Dutch Golden Age scattered masterpieces to the four winds all over the world, and Hungarian collectors also acquired a good many of them. The purchase of the Esterházy collection in 1870-71 already provided the art holdings of the nation with several Netherlandish paintings that are among the gems of our Museum. Károly Pulszky, the director of the picture gallery from its establishment to 1895, as well as his successor, Gábor Térey, purposefully bought Dutch pictures in the international art market. Further important pieces entered the collection upon the acquisition of the collections of Janós Pálffy, György Ráth and Jenö Zichy. Although international purchases had to be stopped after World War I, domestic private collections did and still do not fail to furnish the Museum with intriguing works.

The recent renovation of our Museum’s east wing provided us with the opportunity to display twice as many Dutch pictures as earlier: the current selection, occupying five larger and a smaller room, includes 242 paitings, which forms almost half of the entire collection of Dutch paintings.