New Hollstein Hendrick Goltzius consists of four volumes, compiled by the art historian Marjolein Leesberg and edited by Huigen Leeflang, curator at the Rijksmuseum. The first two volumes contain extensive catalogue information and reproductions of all prints attributed to Goltzius. The third and fourth volumes, which will be published this summer, include approximately 420 prints based on Goltzius’s designs but produced by apprentices, assistants and others. Together with the catalogue of Goltzius’s own work, the four volumes represent the first time that a complete picture has been provided of the artist’s inventiveness and his development as a printmaker and designer.

Hendrick Goltzius was the most important and most influential engraver of his time. Prints produced in his Haarlem workshop were sold throughout Europe and brought Goltzius international acclaim. The works of the master are still collected with a passion and represent the jewel in the crown of many print collections. Although the international sales of his prints made Goltzius a wealthy man, the ambitious artist – in keeping with his motto ‘Honour surpasses gold’ – set much more store by his artistic renown than by personal gain. 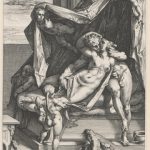