This month, after 41 and a half years, Ángel Navarro retires from the Universidad de Buenos Aires. He will no longer be doing coursework, but will remain somewhat connected to the University as a researcher. Also as of last April, Ángel has started working as a Curator of Drawings (before XIXth century) at the Museo Nacional de Bellas Artes.

For his academic merits, Ángel has received the Premio Vocación de Oro on 6 May 2014. CODART wishes to congratulate Ángel with his new job and his well-deserved prize.

In the 15th-anniversary issue of CODART´s eZine, Ángel contributed with an article entitled Dutch and Flemish Art at the End of the World.

For Spanish-speakers, Ángel was interviewed after receiving the prize: 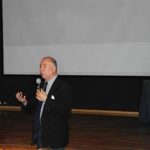