The National Gallery of Art acquired a number of works including a painting by Frans van Mieris and a remarkable trompe l’oeil painting by an unknown 17th-century Dutch artist.

Frans van Mieris was one of the most celebrated Dutch Golden Age painters. His elegant works were marked by smooth execution, invisible brushwork, and extraordinary attention to detail. In his beautifully preserved An Interior with a Soldier Smoking a Pipe (c. 1657) he displays all the qualities that earned him his fame. Intimate in scale and humorous in subject—the roguish soldier has apparently just bested a companion in a game of cards—it possesses a high degree of refinement, particularly in the soldier’s aubergine costume and the gold fringe of a nearby cloak. The painting comes with a remarkable provenance, having once belonged to the Elector of Saxony, August the Strong (1670–1733) from whom it went by descent to the Kings of Saxony and ultimately entered the Gemäldegalerie Dresden. The Dresden museum deaccessioned the painting in 1927 to the Gallery van Diemen, which sold it later that same year to a private collector in Germany. The painting remained in that family until 2008, when it was auctioned by Sotheby’s in London and entered a private English collection. The National Gallery of Art acquired this masterpiece through the generosity of Lee and Julie Folger/The Folger Fund.

Trompe l’Oeil of an Etching by Ferdinand Bol (c. 1675) is the illusionistic tour de force of an unidentified 17th-century Dutch artist. The painting depicts a wooden plank with an etching by Ferdinand Bol affixed with a red wax seal. By using toned glazes and carefully built-up pigments, the artist masterfully imitated the look of the pine wood panel with its rough grain and knots. He also rendered the crinkles and creases of the print so convincingly that it looks like a real piece of paper. 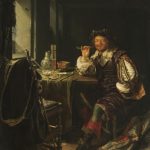 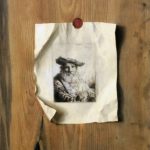